How on earth were national athletes, officials allowed to board plane despite being in contact with two Covid-19 positive sprinters?

June 16, 2021
UPDATE 10.09pm: Muhammad Haiqal Hanafi tested positive for Covid-19 while Khairul Hafiz Jantan was unable to go to Kazakhstan as he was a close contact. Read this Berita Harian report.
As per the Berita Harian report, Malaysia Athletics Federation (MAF) president Datuk S.M. Muthu was quoted as saying:
"Hanya Muhammad Haiqal disahkan positif manakala Khairul Hafiz pula merupakan kontak rapat memandangkan kedua-dua mereka menjalani latihan di Johor. Kedua-dua mereka ketika ini sedang menjalani kuarantin di Majlis Sukan Negara, Bukit Jalil.
Muthu also said the other athletes did not show any symptoms and were allowed to go to Kazakhstan.
There's something called asymptomatic. Also, infected people can transmit the coronavirus when they have symptoms and when they don't have symptoms.
Just because the athletes are vaccinated, it doesn't mean they cannot get Covid-19. In April, 40 healthcare workers contracted Covid-19 after completing their vaccine shots.
I've also received a message from someone with the sports circle who said:
"Haiqal's CT (Cycle Threshold) value was low, around 37, which means the transmission rate was low too. That was the reason why the team was allowed to fly to Kazakhstan."
I hope the Health Ministry or relevant authority will clarify this.
-- 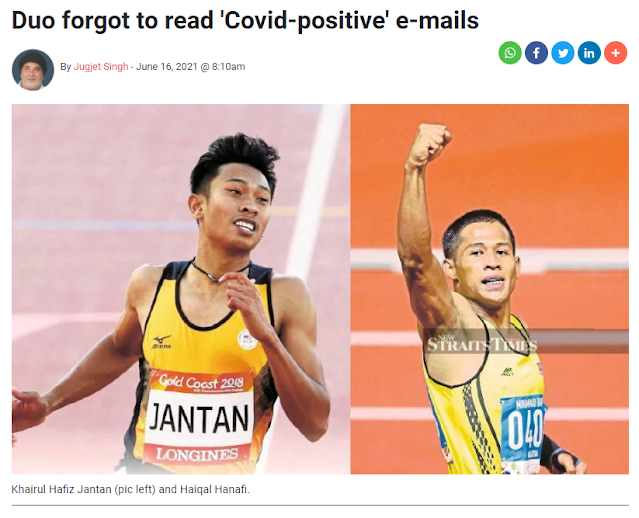 That was the first question that ran through my mind after reading Jugjet Singh's article in the New Straits Times today.

National sprinters Haiqal Hanafi and Khairul Hafiz Jantan were stopped from boarding a plane at KLIA yesterday morning because the duo tested positive for Covid-19.

They were supposed to travel with eight other national athletes to Almaty, Kazakhstan, to compete in the Qosanov Memorial Championships on June 19-20.

The runners didn't read their emails and thus were oblivious of their health status.

Haiqal and Khairul, who were training at the Bandar Penawar Sports School, arrived in Kuala Lumpur on Sunday night, and had their PCR tests the next morning.

Apparently, both of them were oblivious to the importance of the Covid-test results, and "confidently" boarded the bus at the NSC compound at 9pm, Monday, together with the other (eight) national athletes and officials bound for Kazakhstan.

This paragraph caught my eye:

Fortunately, the other eight athletes and two officials were allowed to get into the plane after much intervention from the National Sports Council (NSC).

Two confirmed Covid-19 positive individuals were in direct contact with a team of athletes and officials and yet only the two were barred from going while the rest were allowed to go.

Am I the only one who is seeing what's so wrong about this?

How on earth did security at KLIA allowed a group of people - who have been exposed to Covid-19 positive individuals the night before and on the bus- to board the plane and leave the country?

Who will be responsible if the other eight athletes, the accompanying officials - and those competing in Almaty - test positive for Covid-19?