Showing posts from March, 2016
Show all

Alex Soosay back in AFC 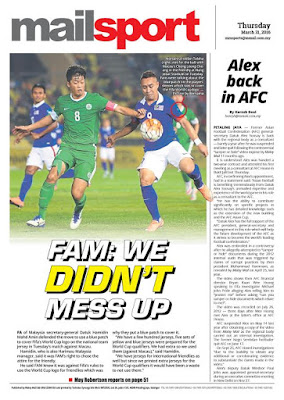 As published in Mailsport today By Haresh Deol haresh@mmail.com.my PETALING JAYA — Former Asian Football Confederation (AFC) generalsecretary Datuk Alex Soosay is back with the regional body as a consultant — barely a year after he was suspended and later quit following the controversial “tamper or hide” video expose by Malay Mail 11 months ago. It is understood Alex was handed a two-year contract and attended his ﬁrst meeting as a consultant at AFC House in Bukit Jalil last Thursday.  AFC, in conﬁrming Alex’s appointment, had in a statement said: “Asian football is beneﬁting tremendously from Datuk Alex Soosay’s unrivalled expertise and experience of the world game in his role as a consultant to the AFC. “He has the ability to contribute signiﬁcantly on speciﬁc projects in which he has detailed knowledge such as the extension of the new building and the AFC Asian Cup. “Datuk Alex has the full support of the AFC president, general-secretary and management in this role wh
Post a Comment
Read more 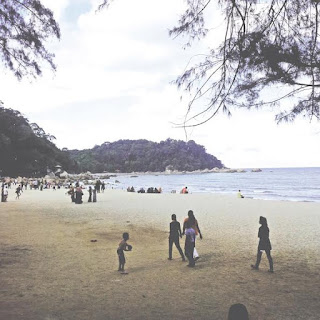 As published in Malay Mail today HARESH SAYS By Haresh Deol THE locals were generous with their smiles; some even went to the extent of waving as they said “Hello”. Such warmth was evident throughout Kuantan, as even the scorching heat failed to melt the spirit of folk living there. The ikan patin tempoyak at Akob Patin House, located behind Gurdwara Sahib Kuantan, was delicious. The small burgers and overly-priced coffee suddenly feel right at Teluk Chempedak, thanks to the beautiful sea view. Thus, the rapid developments along the beaches in Kuantan, that offer breathtaking views of the sea, come to no surprise. A 917sq ft condominium unit facing Pantai Balok can cost up to RM742,000. Those pitching to sell assets are bullish of Kuantan’s potential. With Kuantan Port striving to give their rivals in Port Klang a run for their money and the many oil and gas industries based in and around the city, stakeholders believe the capital of Pahang could be as b
Post a Comment
Read more 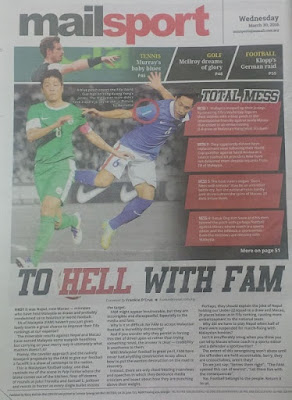 As published in Mailsport today Comment by Frankie D’Cruz   frankie@mmail.com.my FIRST it was Nepal, now Macau — minnows who have held Malaysia to draws and probably condemned us to isolation in world football. FA of Malaysia (FAM) haven’t you just given lowly teams a great chance to improve their Fifa rankings at our expense? The miserable results against Nepal and Macau have earned Malaysia some waspish headlines but carrying on your merry way is ultimately what matters doesn’t it? Plainly, the cavalier approach and the naively kneejerk proposals by the FAM to give our football a facelift is a show of contempt to the nation. This is Malaysian football today, one that reminds me of the scene in Pulp Fiction where the bloke comes out of the kitchen, fires off dozens of rounds at John Travolta and Samuel L. Jackson and reacts in horror as every single bullet misses the target.  FAM might appear invulnerable, but they are incorrigible and disrespectful. Espe
1 comment
Read more

HARESH SAYS: Will the RM100m fiasco be soon forgotten? 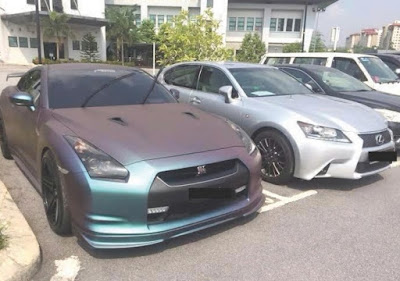 As published in Malay Mail today HARESH SAYS By Haresh Deol IF there is one ministry that is often overlooked by the lawmakers and the masses, it would be the Youth and Sports Ministry. The ministry, among politicians, is often construed as a “small” or “easy” portfolio engineered to win the hearts of youths ahead of the general elections. Sports, as I have written numerous times, has always been the perfect vehicle to drum up support for a particular individual or to fulfil a certain agenda. Many were left dumbfounded when a ranking Youth and Sports Ministry official was nabbed by the Malaysian Anti-Corruption Commission (MACC) last Friday for misappropriating RM100 million since 2010. The funds were channelled to contractors and his personal bank accounts through the National Sports Council (NSC) — the ministry’s funding arm.   The anti-graft body seized RM20 million worth of items from the 56-year-old suspect, including fine jewellery (with the most expensive being a
Post a Comment
Read more

Youth and Sports Ministry RM100m fiasco: Were the auditors sleeping? 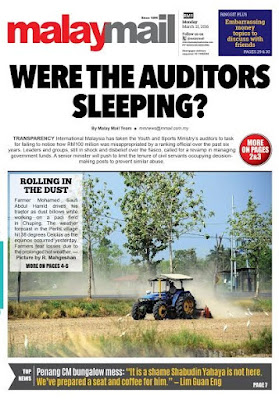 As published in Malay Mail today Reports by Haresh Deol, Vanessa Ee-Lyn Gomes, Wan Noriza Meor Idris and Anith Adilah mmnews@mmail.com.my Sports fraternity in disbelief, demands transparency PETALING JAYA — Athletes and sports officials were shocked and angry over how a ranking Youth and Sports Ministry official had misappropriated RM100 million of the ministry's funds since 2010 without raising any red flags. Mohd Hariff Saleh of Terengganu Cycling Team was fuming upon reading the arrest of the 56-year-old suspect in the news yesterday. Also seized from the official were RM20 million worth of items including 12 vehicles, 40 designer handbags, expensive watches and fine jewellery. His 69 bank accounts which contain RM8.33 million were also frozen. “This should not have happened. The money could have been channelled to the athletes and the associations instead of buying luxurious handbags or jewellery,” Hariff said. “The money belongs to the people, to Malaysian
1 comment
Read more 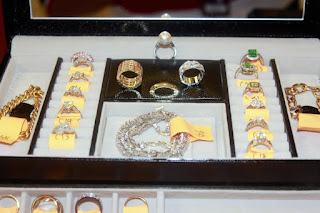 As published in Sunday Mail today Money paid through NSC, says MACC   By Haresh Deol and Anith Adilah   mmnews@mmail.com.my PETALING JAYA – The arrest of a ranking Youth and Sports Ministry official has raised questions over the manner in which funds within government bodies are being managed. The 56-year-old suspect, a mastermind who misappropriated some RM100 million of the ministry’s funds for more than six years, was nabbed by Malaysian Anti-Corruption Commission (MACC) officials during a raid at his house in Kajang on Friday.   The anti-graft body seized numerous items including 12 vehicles – among them an Audi, Mercedes Benz, Nissan GTR and Toyota Vellfire – 40 designer handbags, luxury bedding set, expensive watches and fine jewellery, including a Cartier pearl ring worth RM600,000.   The seized items totalled RM20 million while his 69 bank accounts with RM8.33 million was frozen. Eight contractors, including a woman, were also picked up for their alleged i
19 comments
Read more
More posts