Showing posts from December, 2019
Show all

Unpaid wages in Malaysian football nothing new. But why? 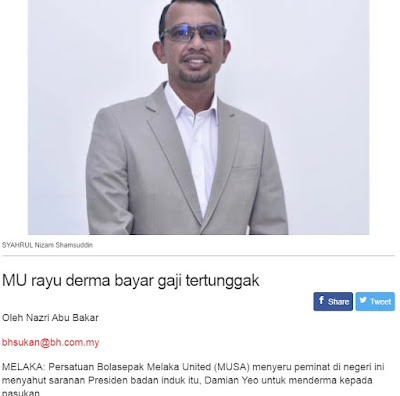 1. The subject of unpaid wages in the Malaysian football scene is nothing new. 2. Every year, just before the new season begins, reports of footballers and coaches not receiving their dues for months hog the limelight. 3. This year is no different. Melaka United Football Association has embarked on a donation drive to raise funds to settle its 2019 debts, as reported b y Berita Harian . 4. In 2011, several Kuala Lumpur fans initiated a Save KLFA campaign following the association's financial woes. The intention was noble but Kuala Lumpur Football Association (KLFA) failed to capitalise on the momentum. Eight years on, KLFA still believes that  placing a politician as its president  will free the association of monetary issues. 5. Long term plans are alien to most sports organisations in Malaysia as its presidents and office bearers are only interested in making an impact, if any, during their term. 6. However, the guardians of Malaysian football had once implemented
Post a Comment
Read more
More posts