Showing posts from November, 2019
Show all

Can KLFA be truly saved? 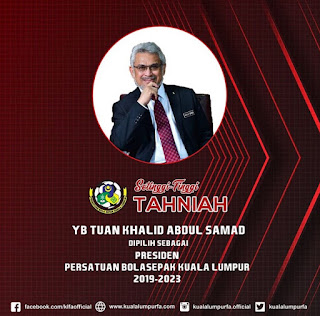 1. Kuala Lumpur FA (KLFA) hogged the backpages of local dailes in the 80s and 90s, winning the Malaysia Cup for three consecutive years - 1987, 1988 and 1989. 2. However, the city team has been struggling to make an impact since mainly due to financial issues - despite the various politicians elected as the president. 3. In 2011, a Save KLFA campaign was initiated, as reported by Foul! 4. Yet, eight years later nothing has changed with the office bearers singing the same tune, hoping the team will be "among the best in the country". 5. That statement is as lame as "bola itu bulat". Shallow, expected, unimaginative and sheer rhetoric. 6. Over the weekend, Shah Alam MP Khalid Samad, who is also the Federal Territories Minister, was named president. He will serve from 2019-2023. 7. Khalid joins the likes of former Federal Territories Minister Tengku Adnan Tengku Mansor and several others in playing a role in KLFA. I wonder how different wil
Post a Comment
Read more
More posts