Showing posts from May, 2015
Show all

May 29, 2015
As published in Mailsport today The Olympic Council of Malaysia (OCM) has asked for a public declaration of assets involving national sports associations following 14 FIFA top officials who were charged with corruption amounting to US$100 million (RM360 million). “The Sports Commissioner’s Office should enforce a public declaration of assets, as this is the best way to ensure transparency. We are prepared to declare our assets. We have nothing to hide,” said OCM secretary-general Datuk Sieh Kok Chi. “This will frighten a lot of people, but if you have nothing to hide, then you shouldn’t be afraid. The declaration of assets and financial dealings will be a good deterrent to curb corruption among sports associations,” said Sieh, adding FIFA members have the power to change the outcome of the world football body’s presidential election as Sepp Blatter prepares for a fifth term in office. “FIFA affiliates, including FA of Malaysia can take the power away from Blatter by th
1 comment
Read more 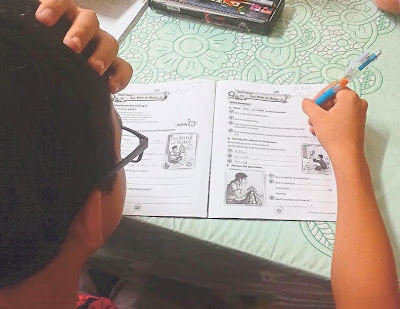 As published in Malay Mail today HARESH SAYS By Haresh Deol CRIES of “Aunty!” echoed in the porch. There stood our neighbour’s son with a dumbfounded look on his face.   Lee junior, who studies in a vernacular school, came armed with a workbook, pencil box and plenty of questions.   Right after he stepped into the house, the Year 4 pupil flipped open his book and zoomed in at a question — Danny bought a _______ for his father and a pair of _______ for her mother.   “So is Danny a boy or a girl, aunty?” Lee junior asked my mother. The other question is about the book The King of Kites.   “Who is the author?” the question read. As the young man pointed out, the book is written by Judith Heneghan and Laure Fournier.    “Shouldn’t it be ‘Who are the authors?’” he asked.   “I is so confused leh,” the boy said jokingly, poking fun at the literals.   He highlighted another sentence in the book: “Anil’s mother is know as _______” when it should be “A
2 comments
Read more

BEING FRANK: Will we get the whole truth?

As published in Malay Mail today Being Frank By Frankie D'Cruz THE discovery of mass graves and abandoned migrant ‘prison’ camps in Perlis is the most brutal chapter in the flight of the oppressed to Malaysia.  No one knows how they died but it points to the barbarism of people smugglers and inaction by Asean nations to counter trafficking. It pains our hearts that there were many horror jungle camps that held migrants who had fled persecution in Myanmar and Bangladesh.  We will never know if those in the graves were victims of mass slaughter by traffickers, starvation or illness, but it certainly is man’s inhumanity to man.  This is more proof that our region has plummeted to new depths of monstrosity. How did we allow the mass killings to happen on our soil? It reeks of incompetence and Myanmar, Bangladesh and Malaysia must get the answers.  We are told the authorities were aware of smugglers’ camps five years ago, but how could it be that these
Post a Comment
Read more

May 20, 2015
As published in Mailsport today By Wan Noriza Meor Idris wannoriza@mmail.com.my THE National Archery Association of Malaysia (NAAM) is determined to go for gold at next month’s Singapore SEA Games. Its president, Mohamad Yazid Yahya, said he was optimistic the squad can shoot down three gold medals, as the women’s compound team had won its first ever gold medal at the Archery World Cup in Shanghai, China earlier this month. “Their confidence is at its peak and we’re aiming for two (gold medals) in compound and one in recurve,” Yahya said, adding a fourth would be a bonus. The compound team comprising Fatin Mat Salleh, Nor Rizah Ishak and Saritha Cham Nong emerged victorious after defeating world No. 1 USA on May 9.  Their win came as a surprise as it was only their second appearance in the competition, their first being five years ago. “We won silver in Laos (2009) and Jakarta (2011) so we’re hungry for our first SEA Games gold,” said Fatin. “
1 comment
Read more

May 20, 2015
As published in Mailsport today By Nicolas Anil  nicolas@mmail.com.my PETALING JAYA — FA of Malaysia (FAM) secretary-general Datuk Hamidin Amin has promised to resolve the Terengganu fiasco as soon possible. The Turtles could face disciplinary action after their fans clashed with police following referee Amirul Izwan Yaacob’s decision to disallow a last minute goal against LionsXII in the FA Cup semifinals on Saturday.  Two Terengganu players were also sent off, which led to fans taking their frustrations out on the police. Four vehicles were destroyed — including an ambulance — which was torched. “We received the match report from the general coordinator and the match officials on Monday.  Our legal department will send a letter to Terengganu FA (TFA) requesting an explanation before the disciplinary board decides on the matter,” said Hamidin.  The fracas also left the visiting team and its 199 fans stranded at the Sultan Mizan Zainal Abidin Stadiu
Post a Comment
Read more

May 20, 2015
As published in today's Malay Mail By Haresh Deol haresh@mmail.com.my KUALA LUMPUR — The Malaysian Anti-Corruption Commission (MACC) advisory board admits the anti-graft body tends to “go in with a bang only to end in a whimper”.  It is also said sections in the MACC Act 2009 must be revised to compel those suspected of corrupt practices, including civil servants, to declare their assets and to curb abuse of power. The board’s chairman, Tunku Abdul Aziz Tunku Ibrahim, said MACC had followed up on its major crackdowns but was done at a “lower profile”. “It’s not just us but even the men in MACC feel the same. We go in with a bang only to end in a whimper. Public perception is something we need to work on,” he said after the board’s meeting yesterday. “Investigations are on-going but we need to keep the public informed. We are all interested in the outcome (of the cases).” He was referring to MACC’s recent series of crackdowns.  The com
Post a Comment
Read more 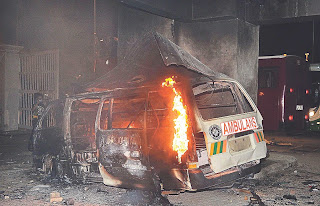 As published in Mailsport today By Haresh Deol haresh@mmail.com.my KUALA LUMPUR — Its anti-hooliganism campaign has clearly failed as the FA of Malaysia (FAM) wants to introduce tough penalties including forcing teams to play in empty stadiums to combat rioting on the stands. FAM general secretary Datuk Hamidin Amin said the Kuala Terengganu incident last Saturday had dented efforts to educate supporters about respect and sportsmanship and it was high time tough decisions were made. Fans went wild at the Sultan Mizan Zainal Abidin Stadium as they torched an ambulance and destroyed a police vehicle after referee Amirul Izwan Yaacob disallowed a goal by the home team in the FA Cup return leg semifinal, allowing LionsXII to play Kelantan in Saturday’s final. “We are tired of talking and must make a stand now. We cannot tolerate violence and must put an end to this,” said Hamidin. “There are provisions for the disciplinary committee to instruct teams to play in empty st
Post a Comment
Read more

BEING FRANK: 'Iron Lady’ goes soft over the Rohingya 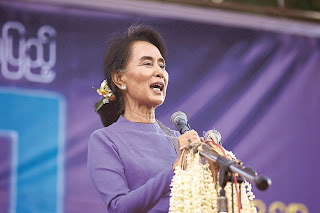 As published in Malay Mail today By Frankie D'Cruz SO inflammatory is the Rohingya issue that Myanmar opposition leader Aung San Suu Kyi has been criticised for failing to raise it. Why the Nobel Peace Laureate won’t say the word “Rohingya” is beyond grasp. This human rights defender wrote an article in early 2012 titled Word power: “Words allow us to express our feelings, to record our experiences, to concretise our ideas, to push outwards the frontiers of intellectual exploration. “Words can move hearts, words can change perceptions. “Words can set nations and peoples in powerful motion. “Words are an essential part of the expression of our humanness. “To curb and shackle freedom of speech and expression is to cripple the basic right to realise our full potential as human beings.” Brian Pellot, writing for Religion News Service, asked in an article last year: “This word, ‘Rohingya’, clearly has power. So why won’t Suu Kyi use it?” A political analyst with
Post a Comment
Read more 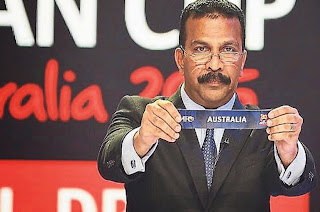 As published in today's Malay Mail By Haresh Deol haresh@mmail.com.my KUALA LUMPUR — The Asian Football Confederation (AFC) suspended its general secretary Datuk Alex Soosay yesterday, weeks after Malay Mail revealed an explosive video implicating the former footballer of wanting to “tamper or hide” documents during the height of the 2012 PriceWaterhouse Coopers (PwC) audit. The decision came as a shock to AFC staff while former general secretary Datuk Peter Velappan stressed the organisation was answerable to all stakeholders and must continue to uphold integrity.  In a short statement on its website yesterday, AFC said: “Datuk Alex Soosay was suspended by the AFC following media allegations which have recently surfaced concerning a case in 2012.  “A video statement conducted as part of a Fifa investigation was passed to media recently and the AFC has now been able to verify its authenticity.” AFC deputy general secretary Datuk Windsor John
Post a Comment
Read more 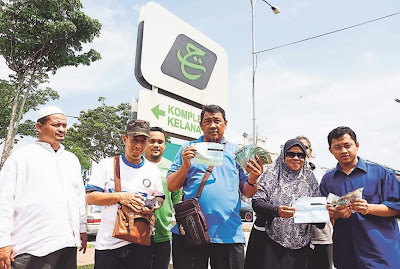 As published in Malay Mail today ANGRY, disturbed, frustrated. These words sum up two major incidents that hit the headlines this past week. First was about convicted child porn addict Nur Fitri Azmeer Nordin. The mathematics student studying at Imperial College, London, was arrested last Nov 20 for having 30,000 images and videos of child pornography. It was widely reported police had during their raid at his home near Hyde Park, found him next to his laptop, sitting beside a life­-sized mannequin. Some insist Nur Fitri should be given a second chance. One particular person even likened the Majlis Amanah Rakyat (Mara)­funded student to “a child who played truant” and should be given a “second chance”. The public played judge, jury and executioner as this is a despicable act. One important factor that slipped the thoughts of many was the need for a sex offender registry. On May 8, Malay Mail reported Suara Rintihan Kanak-­Kanak (Suriana) chairman
Post a Comment
Read more

HARESH SAYS: Language is the soul of the people 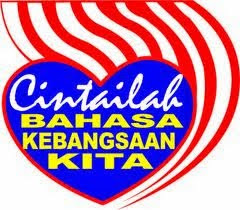 As published in Malay Mail today “Wah, lu punya anak sudah manyak busat.” Mother smiled while I wore a baffled look. We’ve not met ‘aunty’ for ages. Easily in her late 40s, ‘aunty’ is our former neighbour who we bumped into recently while grocery shopping. What the good ‘young’ aunty meant was I had grown. Perhaps she believed I would have remained small after all these years. Giving her the benefit of the doubt, it was just small talk, I told myself. We left minutes later only to meet another old neighbour. “I’m sending my son to Taiwan. No need learn Bahasa Malaysia. Got better opportunity there than here.” Mother and I could only smile. Judging by the value of the ringgit, it is no surprise why some opt for greener pastures elsewhere. But this is not about economics. This is about understanding and appreciating the national language. Sadly, many disregard the importance of Bahasa Malaysia. To most, it is just another subject in
1 comment
Read more

May 01, 2015
A top Asian football official said he had been deliberately smeared on Friday after he was accused of ordering documents to be hidden during an audit triggered by corruption claims. Asian Football Confederation (AFC) general secretary Alex Soosay blamed "election fever" after video surfaced of an employee of the Kuala Lumpur-based body making the claim against him. According to the Malay Mail, the AFC`s financial director said Soosay asked him to "tamper (with) or hide" documents during a 2012 audit. The audit by PricewaterhouseCoopers was ordered in the wake of claims of financial wrongdoing by former AFC chief Mohamed bin Hammam, who is now banned from football. But Soosay, speaking to AFP after this week`s AFC congress in Bahrain, said: "The case is closed. It was thoroughly done and dealt with and bin Hammam was suspended. "It`s completely, I don`t know, all of a sudden taken out of context. It`s election fever. But the
Post a Comment
Read more
More posts