Showing posts from January, 2013
Show all

January 30, 2013
"....hockey, table-tennis and badminton were all re-instated." Those were the words of Myanmar's sports ministry official Htay Aung as quoted by AFP as the three sports will now be contested at the year end Myanmar Sea Games. Read more at: http://english.astroawani.com/news/show/myanmar-annoys-rivals-with-sea-games-picks-5583?cp Earlier reports confirmed several Olympic sports were axed from the regional Games as seen here . It caused a lot of dissatisfaction among participating nations. Kudos to the Olympic Council of Malaysia and their counterparts who fought their case. However, do expect plenty of fireworks during the Games - especially in football. Remember the "age manipulation" issue during the AFC Under-22 competition last year? Do read here and here to refresh your memory. The Harimau Muda A lads will get a clearly picture when they play Myanmar in a friendly match in Yangon on Feb 22. Oh well... HD says: The Sea Games should be ab
Post a Comment
Read more

January 29, 2013
Press release by Tunku Zain Al-’Abidin ibni Tuanku Muhriz regarding statements by Tunku Aziz and Anthony Loke.     I will be writing about the statement by Tunku Abdul Aziz bin Tunku Ibrahim and the response by Anthony Loke Siew Fook more fully in my usual column on Friday but for now I emphasise the following:   1.       It is unfortunate that private discussions have been made public.  Political parties should be able to freely engage any Malaysian citizen to discuss confidential proposals within the boundaries of the law.  I am grateful to Dato’ Saifuddin Abdullah, Deputy Minister of Higher Education, for his tweet: “klu x terima, kita senyap jer. Hormatilah privasinya. Mcm meminang x jadi, x perlu heboh.” 2.       However, now that this has been brought to the public domain, I can confirm that the descriptions of the contents of my conversation with the DAP some months ago are broadly accurate.  As it was an informal conversation, no minutes were taken.
Post a Comment
Read more

He was known to be extremely critical over the national team. He was there at almost every Malaysia Open, often spending time speaking to members of the Press. That's Eddy Choong ( pic ). Sadly, the four time All-England champion drew his last breath at a hospital in George Town, Penang yesterday evening (3pm). He was 82. Sports Minister Ahmad Shabery Cheek offered his condolences, saying it was a big loss to the nation. However, Shabery said that Eddy will always be remembered - in his words, "dulu, kini dan selamanya". Read more here . HD says : RIP sir. You will be missed.
Post a Comment
Read more

January 28, 2013
UPDATE 6.20am (Jan 29): Baljit sends a text message that read; "Hi bro, water is back finally. Thanks bro alot..." Well thank you Syabas. -----------   UPDATE 5.30pm: Still no sign of water. Read what Baljit and Syabas have got to say here . ----------------  UPDATE 10am : Just got off the phone with Syabas' customer service and they claim the pump house at Taman Halaman was faulty but has been repaired. They are unable to give an estimate time to when water will be made available to all areas but hope it will be done by today itself. Plenty of faulty pumps these days eh? #justpointingouttheobvious ---------------- I am writing to you hoping you would seriously consider the plight of national hockey player Baljit Singh ( pic ). You see, Baljit is finally tying the knot with his sweetheart of almost five years, Jesvin Kaur, this weekend. Just like any other young couple, they wish to have a memorable wedding with plenty of fond memories. And mind yo
Post a Comment
Read more

UPDATE Jan 29, 2pm: Table tennis and hockey have been included in the Myanmar Sea Games. Olympic Council of Malaysia and other Olympic Committees are fighting for the inclusion of badminton. The tweet by Astro Arena's (who is also Sportswriters Association of Malaysia president) Ahmad Khawari Isa says it all. --------------- Malaysia will suffer a big blow as badminton, hockey and gymnastics will not be contested at the year end Myanmar Sea Games. Indonesia Olympic Committee chairwoman Rita Subowo confirmed the sport was not in the list of games for the regional meet. “I just received the list today and badminton is not registered as the SEA Games’ sports ,” she said as quoted by Jakarta Globe . The other sports excluded from the Games are tennis and table tennis. Olympic Committee of Thailand’s Vice-President Charoen Wattanasin was quoted by The Irrawaddy as saying that "Singapore had already sent a letter asking Burma to revert its decision". It rem
3 comments
Read more 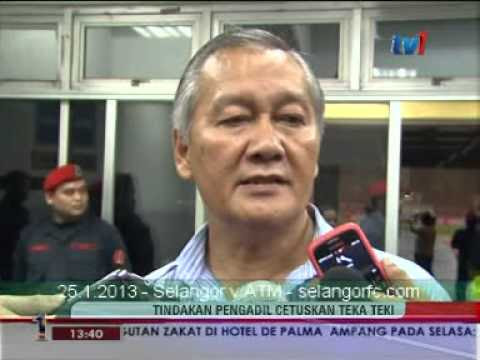 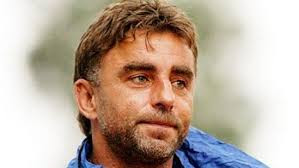 UPDATE 6pm: Police almost certain the body of a young boy found in a river in Klang is that of William Yau. -------- He once donned Sabah's jersey. He played alongside countrymen Jaruslav Netolicka and Michael Vana for the Borneo side. He drew his final breath yesterday. He is Czechoslovakian footballer-turned-coach Miroslav Janu ( pic ). Harimau Muda A coach Ong Kim Swee had quickly messaged me right after landing in Brisbane asking if I had any updates on Janu's condition after the latter suffered a heart attack earlier in the day. Sadly, I had no good news to offer Kim Swee who also played for Sabah in the 90s. Janu, the coach of Surabaya-based football club Persebaya, died at the age of 53 at Jemursari Islamic Hospital in Surabaya, East Java, at around 12 pm on Thursday, due to a heart attack, reported The Jakarta Post. Some will remember Janu as Sabah's all time best 11 . A sad day for football. HD says: Also sad that a body, of a fair skinne
Post a Comment
Read more

Maulidur Rasul - the celebration of the birth of Nabi Muhammad . To all of  you celebrating this holy day - Salam Maulidur Rasul.
1 comment
Read more

From London to Kota Bharu

Obviously it started with international football. How Sir Alex Ferguson seemed rather bitter after Manchester United were held to a 1-1 draw against Tottenham Hotspur, how Liverpool's ' SAS ' combination of Luis Suarez and Daniel Sturridge saw the 5-0 demolition of Norwich and Pep Guardiola 's move to German giants Bayern Munich. Nevertheless, the main highlight of the night - to me that is - was Malaysia's 158th position in the Fifa ranking and military officers seen at the stadium in Kota Bharu during the recent Kelantan-Darul Takzim FC match. It was a good discussion between football coach by day, club manager by night Craig Morraies , long time football pundit and radio star Ross Yusof, host Roshan Narayan - who is adjusting to married life (hehe)- The Star's Nelsen Ng and yours truly on another episode of Bola@Mamak . It has been awhile since I was invited to the show due to my recent working commitments. Looking forward to another great discussion
Post a Comment
Read more

January 22, 2013
Malaysia is among the countries which registered the highest illicit financial outflows from 2001 to 2010 period, according to the Global Financial Integrity (GFI). The Washington DC-based GFI said in its report that from 2001 to 2010, a massive US$285.24 billion (RM860 billion) have flowed out illegally from Malaysia, according to the latest edition of business weekly "Focus Malaysia". Read the full report by Bernama here . I've written about this in the past. Yet, the script remains the same. And one of the contributors to illicit financial outflows - football betting and match-fixing. Time to legalise football betting so that the government can make some money from it? Hopefully that will stop match-fixing? After all, if the funding arm of the Sports Ministry obtains millions from a lottery company, why not money from football betting channelled to the development of the sport at the grassroots? HD says: Hmm...
3 comments
Read more

'Get your drugs from NSI'

That's basically the advice by middle distance runner P.Yuvaraj to fellow athletes. Yuvaraj totally understands the frustration of being "robbed" of a win and to be shamed publicly although he was a mere victim or circumstances. And the best part, Yuvaraj is no dope head. But the 4x400m quartet who shocked everyone with their gold medal effort at the 2011 Sea Games later hogged the limelight for the wrong reasons after Yuvaraj's team mate Yunus La Salleh tested positive for a banned drug. "My philosophy is simple... only take medicine approved by the National Sports Institute (NSI). When it doubt, just consult them. It's as simple as that.” Read more here . HD says: By the way, have you received all your money from the IOC scholarship Yuvaraj? #justasking Read more at: http://english.astroawani.com/news/show/take-drugs-from-nsi-insists-yuvaraj-4500?cp Read more at: http://english.astroawani.com/news/show/take-drugs-from-nsi-insists-yuvaraj
2 comments
Read more Lance Armstrong confesses; "It did not feel wrong at that time. Scary" Armstrong was not afraid of being caught. 'There weren't many out of competition testing'; he 'schedules' taking drugs to be clean during races. "I'm not the most believable guy in the world at this moment, I know that."  "Yeah...yeah. I was a bully."  "I don't know if you took the two words out of thin air but I'm both, more of a jerk now than a humanitarian." "Look at this arrogant prick (referring to himself). I say that today." "It did not feel wrong at that time. Scary." "That was the last time I won, (my speech, before I retired after my 7th win) it was lame." "I didn't know it was big but I now know. I see anger, betrayal by people who believed me. They've every right to feel betrayed, it's my fault." Those were some of the quotes by Lance Armstrong during a worldwide exclusive interview with Oprah Winfrey on that ended minutes ago. Hours before
Post a Comment
Read more 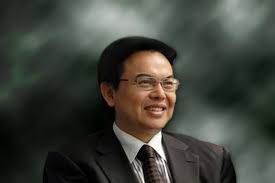 "This is my last term with BAM as president and the executive council (exco) members have urged me to go for it. I have agreed." Those were the words of Nadzmi Salleh ( pic ) as reported here . It is important to have some form of representation within the world body. However, should Nadzmi eye for the job? With all due respect, Nadzmi has got bigger issues to deal with at home. For starters, the nation is certainly heading toward Indonesia's direction as to the serious lacking of talents. The country continues to pin its hopes on world No 1 Lee Chong Wei - but for how long? Also, the nagging issue of players from clubs not given the due respect they deserve. While the BA of Malaysia may say otherwise, the presumption still lingers that club players are continued to be sidelined. Nevertheless, we now have the Sports Minister handing out money to a particular club and to quickly add that other clubs also deserve funding by the ministry. Good recognition but who
4 comments
Read more
More posts