Showing posts from August, 2018
Show all

Nadi Arena Analisis Sukan Asia Jakarta-Palembang 2018 producer Lukman Salleh and I were searching for information regarding the Podium Programme on the National Sports Institute (NSI) website. And we couldn't find anything. After my show on Astro Arena (live 9pm-10pm daily till Sept 2 on channel 800 and 803HD), I tried visiting NSI's website again and still can't seem to find any info regarding the Podium Programme, unlike before. We tried clicking under Info Korporat followed by ' Program Podium ' (listed under the 'Bahagian' section) and were redirected to the landing page instead. Thankfully I have screened shot information regarding the Podium Programme's objectives, as documented in my previous articles: April 15, 2018: Walk the talk April 17, 2018: Sports programme galore - success of waste of tax payers' money? It's baffling that such crucial information is 'missing' from the website. It gives
Post a Comment
Read more

Story behind Fight of Champions 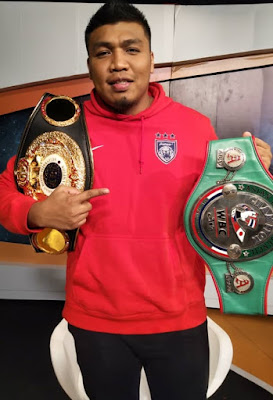 On Tuesday, professional boxer Farkhan Haron and I were invited to be on RTM's Planet Sukan  as we spoke about boxing. As we stepped out of the studio right after the show, I asked Farkhan why didn't he fight in the recent Fight of Champions? "Technical issues" was his brief reply followed by a smile. He refused to elaborate further. Farkhan was earlier listed to compete in the Fight of Champions. Farkhan is sponsored by Tunku Ismail. He also said this during Tuesday's live show on TV1. And here's what I learnt hours earlier. Tunku Ismail Ibrahim was supposed to be involved in the fight but a "disagreement of certain terms"  resulted in the Crown Prince of Johor opting out from the event. I wrote, on March 9 , that Manny Pacquiao had visited Tunku Ismail twice late last year over the possibility of organising a boxing match. Later, there were concerns that the organiser MP Production did not engage a local organiser, a requirem
1 comment
Read more
More posts