Showing posts from March, 2014
Show all

While questions remained unanswered, spare a thought for those on board MH370

Haresh Says, as published in The Malay Mail today “I DON’T know what to say, what to think. I feel so lost, so blank. I’m just so tired. Goodnight, daddy. Sigh.. * hugs *” The heartbreaking tweet was by Maira Elizabeth Nari, the daughter of Flight MH370 chief steward Andrew Nari on Monday night. It was posted some three hours after Prime Minister Datuk Seri Najib Razak’s brief press conference confirming MH370, which went missing on March 8, “ended its journey” in the Indian Ocean. Najib said this after obtaining confirmation from Inmarsat as the British company had used the Doppler effect — the change in frequency due to the movement of a satellite in its orbit — to determine the location of the Boeing 777 that had 239 people on board. The Australia Defence Minister David Johnston stressed while the information by Inmarsat was all the authorities had at the moment, he said the episode was “a mystery” and until authorities recover and positively identify
Post a Comment
Read more 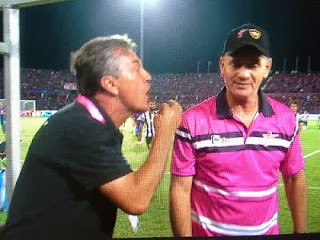 My heart goes out to the family members of those on board Malaysia Airlines Flight MH370.    Haresh Says, as published in Mailsports today. Images of team officials and players arguing on the sidelines followed by claims of assault in the tunnel at Larkin Stadium on February 1 have been grabbing the headlines recently. There was hesitance by certain quarters to name those involved during half-time of the Johor Darul Takzim (JDT) against T-Team after several players and officials claimed Johor FA president Tunku Ismail Ibrahim, who is also the Crown Prince of Johor, was in the tunnel. In a Super League match on February 7, Pahang’s Jamaican player Damion Stewart claimed he was subjected to abuse by JDT Argentinean imports Luciano Figuero and Pablo Aimar. It is now the final week of March, almost two months since both incidents took place. Yet, the FA of Malaysia (FAM) disciplinary board have yet to discuss these incidents. Why the delay? High pr
Post a Comment
Read more

The Jalur Gemilang and Australia flags printed on the official programme book for the 23rd Sultan Azlan Shah Cup were inaccurate. The Malaysia flag had only 12 stripes and it started with the white stripe. The flag has 14 stripes and starts with the red stripe. The Australia flag printed on the book only had four stars, instead of six. Who do we blame for this?
Post a Comment
Read more

Where is the money, MHC?

Haresh Says, as published in Mailsport today. LET’S look at the facts. The National Sports Council director-general Datuk Zolkples Embong was quoted saying: “Malaysia Hockey Confederation (MHC) have many programmes but are facing financial constraints.” MHC secretary Datuk Johari Abdul Aziz had then said: “I don’t think there is a financial crisis but I have to check with the relevant officials.” MHC treasurer Datuk N. Radhakrishnan said: “After going through the accounts, I can confirm we are not broke.” So what’s the story? The only thing consistent is all three quoted had the title ‘Datuk’ in front of their names. Period. While some continue to debate if MHC is in the red or otherwise, the reality remains that hockey players and teams have not received subsidies, prize monies and incentives promised to them since last year. This include those who participated in the Raja Noorashikin Cup last October, the national Under-14 and national
Post a Comment
Read more

March 15, 2014
As reported by national news agency Bernama The Lawn Tennis Association of Malaysian (LTAM) has appointed two foreign coaches to find new talents for grooming as international class players.      Its president, Tan Sri Abdul Razak Latiff said the coaches from Australia and Holland were stationed at the Youth Tennis Academy of Tun Razak Tennis Complex in Jalan Duta which was opened on March 1.      "RM1 million has been allocated to develop youth tennis to put them on par with international players. We hope with the setting up of the academy, parents can send their talented children there to learn new techniques and skills," he told reporters after a press conference on the Malaysian Open BMW Tennis Championship 2014 at Kuala Lumpur Convention Centre here, today.      Abdul Razak said Malaysia has many talented youth players but they found it difficult to give their commitment as they have to focus on their studies.      "Physical strength is also a factor why they
Post a Comment
Read more

We're all one big family

Tension mounts in Crimea as troops from Ukraine and Russia are mobilised to prepare for a possible war. In the centre of this episode are Malaysians who most are fulfilling their dreams of graduating to becoming doctors. It is a worrying state for their families feel helpless and can only worry about their fate. Despite the uncertainty, political unrest and depressing news hogging the first few pages of the local dailies, the back pages offer a glimmer of hope. Just like every global episode, sports — or in Ukraine, football to be exact — has turned out to be the nation’s unifying factor. The Ukraine football team were supposed to host USA in a friendly match in Kharkiv last Wednesday but the match was instead moved to Larnaca, Cyprus due to security concerns. Prior the match, Ukraine skipper Anatoliy Tymoshchuk was quoted as saying: “National team is a symbol of unity because players come from all over Ukraine.” “We’re all one big family, we’re all united.” Ukraine went on to defeat U
Post a Comment
Read more

Malaysia Airlines (MAS) said in a statement that flight MH370 had disappeared at 02:40 local time on Saturday (18:40 GMT on Friday) after leaving Kuala Lumpur.   Acting transport minister Hishammuddin Hussein, had some 10 hours after the incident, said there was no sign of wreckage, as reported here . A total of 239 passengers were on board the plane which was headed to Beijing. Experts remained "surprised" over missing plane as Boeing 777 dubbed 'safest plane ever', as reported here . The plane was bought in 2002 and had one safety incident in the past. While officials (as of 11.02pm) still claim they have yet to obtain any confirmation of the plane's location, family members of the passengers were told to prepare and bring their passport s to the Kuala Lumpur International Airport. Among speculations: 1) Plane hijacked by terrorists 2) Plane exploded in the air 3) Loss of control 4) Landed safely in Xian or Nanning, China 5) Plane crashed
Post a Comment
Read more

March 06, 2014
Former Kuala Lumpur player Hafizi Roslee who was banned for life by the Football Association of Malaysia (FAM) due to his alleged involvement in match-fixing and bribery, has filed a suit against the national body.    Hafizi, 29, who filed the suit on Feb 26 through Khairuddin, Ngiam & Tan at the High Court Registrar here, named FAM and the Kuala Lumpur Football Association (KLFA) as the first and second defendants, respectively.     His lawyer Kevin De Rozario said the court had set March 17 for case management in the presence of Judicial Commissioner Rosilah Yop.     In his writ of summon, Hafizi urged the court to nullify FAM's decision to ban him for life from football activities.     Hafizi alleged that the FAM's action was unconstitutional and done without arbitrary which was a breach of the rules of natural justice and public policy since the FAM had heard his case on Dec 20, last year without his presence.     On Dec 20, the FAM Disciplinary Committee banned
Post a Comment
Read more

March 04, 2014
●  Where are the fields? While the city team have been struggling in the M-League and several players charged for match-fixing, KLFA have sustained a well-organised league over the years. Some 71 teams have signed up for the KLFA League this year — 10 teams in the KLFA Super League, 28 teams in Division 1 and 33 teams in Division 2.  The league has managed to attract teams from other states including Syarikat Air Melaka Bhd and Pelabuhan Tanjung Pelepas, Johor. Sadly, the lack of playing fields in the city have forced KLFA to organise matches at the KL Hospital field. The other venues in the city include Batu Cantonment field (Jalan Ipoh), Institute Pendidikan Ilmu Khas in Cheras, University Malaya and the National Sports Council field in Bukit Jalil. Some matches are played at the Maybank field in Bangi while there are on-going efforts to get Pulapol to lease their field at Jalan Semarak. Since there are not many fields in the heart of the city, it would be wise if KLFA start talkin
Post a Comment
Read more