Showing posts from August, 2013
Show all

August 30, 2013
Will Thailand be sending their national Under-23 squad for the Merdeka Cup tournament? That seems to be the poser as sources in Bangkok revealed 16 out of the 22 players selected for the tournament hail from division two southern region league Nara United FC. Three other players are from Muangthong FC youth team while the remaining players are from the Thai Police team. “This is not our national Under-23 team as most of them are attached to their clubs and have commitments. This is just a selection of players, mostly from Nara United,” revealed an insider. Apparently Thai newspapers have questioned the Thailand FA but have not been able to get a straight answer from them. And Harimau Muda A coach Ong Kim Swee is not impressed, if the Thais do not come with their national Under-23 squad. Read more in Mailsport today. HD says: Foreign teams should start taking our competitions seriously.
2 comments
Read more 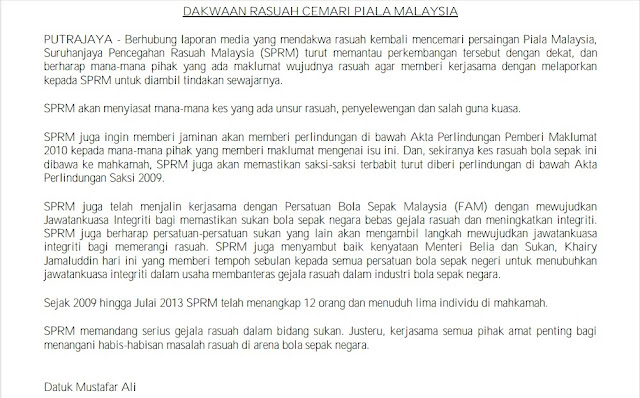 August 29, 2013
Below is an email sent by national swimmer Chui Lai Kwan to Sports Minister Khairy Jamaluddin yesterday.   It is unclear if Khairy has read this email.   It is with regards to events leading to Lai Kwan's exclusion from the World Championships in Barcelona held earlier this month.   Some claim the Sabahan is being "used" by certain parties.    However, the fact remains that talents are often ignored the moment they opt out from the national training structure. Such is usually seen in the badminton fraternity.   It must be noted athletes from developed countries are free to train on their own and only gather before a major event, something which Lai Kwan pointed out in her email.   Perhaps this could be one of the subject of discussion during the Youth and Sports Ministry's Hari Raya do at the Juara Stadium in Bukit Jalil today.   Read more in today's Mailsport.   -------     Firstly, please thank YB Khairy for taking the time
3 comments
Read more

“We have even requested used hockey sticks and goalkeeper padding from the national team yet we get nothing. Now you have a government agency handing out 300 new balls and equipment to a foreign national team. Wow!” Those were the words of a Kuala Lumpur-based school teacher. Such frustration come as a surprise, more so after the National Sports Council (NSC) handed over hockey equipment to the Myanmar national hockey team in Ipoh — a ceremony which did not see any publicity — over the weekend NSC's gesture may seem noble. It can be construed as a means to help promote the game in Myanmar. Some may even call it “Asean solidarity”. But those at the grassroots find the act hard to comprehend. Apparently a school in Sepang requested a small number of equipment through a junior hockey programme funded by the council but have not received any feedback. If true, why? Do read the full commentary Haresh Says before jumping into any conclusion. HD says: As anoth
6 comments
Read more

'Coaches should work with teachers'

The Education Ministry has urged national sports associations (NSAs) to plan ahead to ensure the education of their student athletes is not compromised. The ministry’s sports department director Ee Hong ( pic ) said NSAs should be mindful of the examination period and to ensure their athletes apply for the Agrotat System and meet the criteria. “Education is important and it is paramount they fulfil the regulations set by the Agrotat System if they are to compete in major tournaments abroad,” said Ee Hong. “NSAs should plan ahead instead of doing things on an ad hoc basis.” National hockey junior team manager Mirnawan Nawawi called the Agrotat System “illogical”, as published in Mailsport yesterday . Read the full report here . HD says: Through my conversation and meetings with various parties, only one name came popping up. Sigh!
2 comments
Read more

August 26, 2013
The Agrotat System, introduced by the Education Ministry, needs to be reviewed as student athletes seem to be at the losing end. National hockey junior team manager Mirnawan Nawawi said students are left in the lurch due to the “illogical” requirements attached to the system. The Agrotat System is similar to the school-based assessment system where a student’s achievement is assessed, graded and recorded throughout the year. Student athletes representing the nation are required to apply to the examination syndicate to be evaluated under the system. They, however, are only subjected to such a system only if they are competing abroad during the examination period. If they return to the country on the same day of the examination, they are required to sit for the paper. “You don’t expect a student, who has played a series of top flight matches, to rush to school to sit for his paper the minute he touches down in the country? Where’s the logic in that?” said Minarwan. “The athlete
2 comments
Read more

August 24, 2013
The ringgit is at a three-year low against the US dollar, having shed over 7 per cent in value versus the greenback since the start of the year. While developed nations are heading up, developing countries have gone in the opposite direction; MSCI’s Emerging Market Index showed a loss of 13 per cent in equity since the start of the year. Worryingly for observers, this is the biggest the gap between developed and emerging markets has been since the 1997 Asian financial crisis. Read the growing chasm between world markets warns of new crisis here .  Meanwhile, remember the 1Malaysia and One Israel debate? Well it looks like Malaysia has been accused of plagiarising another Israeli motto - Endless Possibilities. Three years ago, certain politicians said the link between 1Malaysia and One Israel propounded by the opposition was just a lie. Today, the Prime Minister's Office said the government came out with “Endless Possibilities” as its new global theme months befor
1 comment
Read more

It is the worst bus crash the nation has ever seen. 37 killed, 16 injured after a bus plunged into a ravine near Genting Highlands on Wednesday. The Land Public Transport Commission pledges to investigate, find the cause of the accident, come up with preventive measure and penalise those responsible. But haven't we heard all of this before? In fact, it is business as usual at the Pekeliling bus terminal where the bus company operates while passengers remain oblivious to the fact they too could be a casualty if things remained the same. Read all this and more in The Malay Mail today. Meanwhile, Englishman Peter Butler - who quit as Kelantan and T-Team coach - has left Twitter too! It is unclear to why Peter decided to ditch the social media tool but many believe it had to with some ranting which later turned into a spat between several other Twitter handlers which stemmed from Lim Teong Kim's appointment as the football technical director under the National Sports Cou
2 comments
Read more

KJ's 100 days in office: Awakening not a prob, it's more than fun and games

Umno Youth chief Khairy Jamaluddin insists the soon-to-be-launched book on his father-in-law, former prime minister Tun Abdullah Ahmad Badawi, will neither help nor frustrate his cause as he seeks to defend his post during the Umno elections in October. Meanwhile, the Rembau MP spends some time speaking about his 100 days in office - as he spoke about claims that he is too eager for changes, presumption he is spending more time on sports than youth, on making popular statements and his aspirations. Read ' Awakening not a problem ' and ' It's more than fun and games' in The Malay Mail today.
1 comment
Read more

The bola is more than just bulat 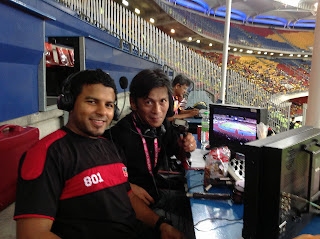 Haresh Says as published in The Malay Mail today We sat at a regular mamak restaurant in Bukit Jalil, drinking teh-o as a camera crew of three stood in front of us. It was a typical setting of football show Bola@Mamak which, sadly, is no longer aired over Astro Supersport. There was an episode where I sat next to former KL player Stanley Bernard Stephen Samuel and another guest jokingly referred to him as a 'professional injured footballer'. Stanley featured for India’s Sporting Clube de Goa and MyTeam. He is still itching to get back on the field but a long knee injury has seen him taking up a new role — as a pundit and a match commentator. Stanley is not alone. Newly appointed T-Team assistant coach Azlan Johar, who once coached KL Malay Mail thanks to an offer made by then team manager Tony Mariadass, made his name as a pundit and commentator for Astro Arena over the years. During the recent Malaysia-FC Barcelona match, Kelantan coach Bojan Hodak provi
3 comments
Read more

The Malaysia Cup drama has started, even before its kick off tonight. Former Singapore international Fandi Ahmad ( pic ) submitted his resignation letter as the Southern Tigers team manager on Saturday. His decision was accepted by the Johor FA. What led to Fandi quitting the team? Was he slighted after he was removed as coach? Did he have actual say in the team? Fandi said he has "no regrets" leaving the team and did not rule out the possibility of coaching another Malaysian team in the future, as reported in Mailsport today. Meanwhile, here is the history of the Malaysia Cup and the list of past winner. While Fandi leaves, former minister Shahrizat Abdul Jalil ( pic below ) returns to Putrajaya as she is set to be appointed as a special adviser to Prime Minister Najib Razak. She made a similar return during former Prime Minister Abdullah Ahmad Badawi's tenure in office. Apparently, "tawar hati" with The Malay Mail Online's headline which rea
2 comments
Read more
More posts