Showing posts from February, 2019
Show all

2017 KL SEA Games Report: Let's give credit where credit is due 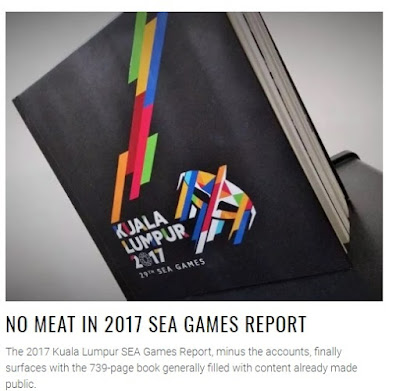 1. Sports is about giving your best. Only the best are rewarded and glorified. The rest are easily forgotten. 2. Criticism is part of sports. Criticism pushes athletes, coaches and stakeholders to produce better results, to put a good performance. 3. After all, those who would win accolades and the hearts of the people through such motivation is the athlete and those around him or her - and not the critics. 4. The Malaysian athletes contributed 145 gold medals at the 2017 SEA Games held in Kuala Lumpur, enabling the host nation to be crowned the overall champions. 5. But this fact was overshadowed by numerous unsavory episodes throughout the meet, as documented by the author on Aug 31, 2017 and the Bangkok Post , among others. 6. Some 18 months following the Games, the 2017 SEA Games Report finally surfaced. The report did not provide any analysis, data or insights but for some messages, a commentary by the Malaysian Organising Committee (MASOC), team list of the partici
Post a Comment
Read more
More posts