IF hypocrisy was competed at the Olympics, we would have won gold a long time ago.
Why do I say that?
Here goes:

Hypocrisy 1
Some two weeks ago I had a chat with some acquaintances.We were discussing the current predicament faced by Malaysians. Hailing from various backgrounds, speaking to them allowed me to better understand the very many sentiments of the average Malaysian on a Light Rail Transit.
The subject of racism was raised. The group swore they were Malaysian first and demanded to be treated with respect and equally. They said no one should be judged by the colour of their skin or faith.
I asked: “So if you brought a guy or girl of a different colour or faith home, would it be a problem?”
One put his head down and said yes. Another in the group blurted: “My parents will kill me.”
There was utter silence around the table.
So much for respect and equality.

Hypocrisy 2
Selangor Menteri Besar Datuk Seri Azmin Ali launched the “Once a week public transport programme” in Shah Alam on Monday. The objective is to cut traffic congestion, reduce private-owned vehicles to 40 per cent and increase use of public transportation to 60 per cent.
Sounds like a good initiative. But here’s the baffling bit. If the objective is to cut traffic congestion, why has the state government allowed the building of several highways despite public uproar?
Trees are being cut and hills being cleared. Two major highways are coming up in Ampang and this would only result in more vehicles on the road. Doesn’t it go against the objective of getting people to use public transport?
Sheesh!

Hypocrisy 3
The authorities often say they “respect” the people, that they have the people’s welfare at heart.
Yet, the nation’s capital is often hit with water disruptions. The year is coming to an end and we have had six occasions of major water cuts in the Klang Valley, last Monday being the latest.
Some 3.8 million consumers, including yours truly, are hit and are forced to make do with what little water we have saved.
This is the second time consumers are facing disruption ahead of a festive season. A similar situation occurred just before Deepavali.
There was no proper explanation prior the announcement. This newspaper spoke to the people and recorded their anger as published by Sunday Mail ‘Bracing for dry Xmas’.
I find the situation baffling 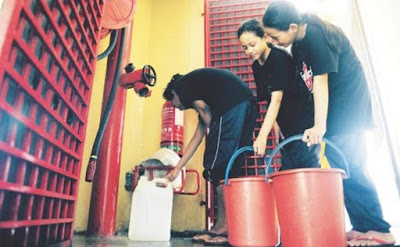 The National Water Services Commission (SPAN) had on Monday said water companies will not be allowed to undertake maintenance work during festive season.
You don’t need someone to tell you that. It does not need to be a rule. It’s common sense.
What’s mind boggling is that the Klang Valley, the heartbeat of the nation, continues to face water woes.
We are four years short to being called a developed nation but Kuala Lumpur and its surrounding areas still suffer water cuts. Unbelievable!
Some politicians have conveniently used this episode to hit at the Selangor government. It’s not just a Selangor problem, it’s the Federal government’s problem as well.
Those who are quick to criticise should instead do something — like ensure both the state and federal governments find a workable solution. Consumers are tired with the blame game played by lawmakers from both sides of the divide.
If our politicians truly have the welfare of the people at heart, they would have done the right thing a long time ago.
Talk (or issuing press statements) is cheap.

So there you have it. We end the year with much bitterness, hypocrisy and anger.
It’s supposed to be a jolly good season but such events have made us realise how far behind we are — when it comes to respecting the stranger next to us to ensuring consumers get their money’s worth.
Our roads are still riddled with potholes while street lights do not function. Our Internet and mobile connections remain crappy and our football team is in the doldrums.
We continue eating in filthy restaurants and many insist in Malaysia “semua boleh”.
And we are still generalised based on skin colour and faith.
It’s getting tiring.
Let’s make our so-called representatives work, keep them on their toes and make sure they serve us right.
But it begins with us. If we don’t change our ways, nothing will.
For starters, let’s stop being hypocrites.

NOTE: Here’s wishing Malay Mail readers a Merry Christmas. Do have a jolly good time with your friends and loved ones.