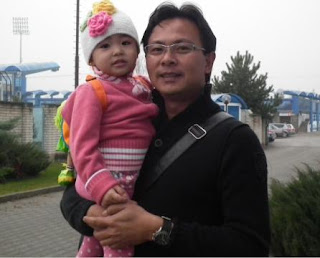 Those were the words of three-year-old Dasha Ong.

And the words of Dasha just hours prior the kick off between Indonesia and Malaysia in the final certainly motivated Kim Swee.

In return, Kim Swee motivated the lads and they won.

As expected members of the Press - even those not from the Sports Desk - had numerous questions for Kim Swee.

Some wanted Kim Swee to share his experience in Jakarta, others were penning down every word of his when he slammed the organisers for their antics which certainly disturbed him and the boys.

But the celebrations must come to an end as Kim Swee and the Olympic lads will now face Syria in the Asia zone Olympic qualifiers tonight (8.45pm).

And Kim Swee had this to say:
"The players are tired but with the support of the fans, if they come in full force, perhaps that will motivate our players."

HD says: Hope Kim Swee will get to enjoy his much awaited break with his family soon.
football Malaysia Ong Kim Swee