HARESH SAYS: And the best man for FAM is ... 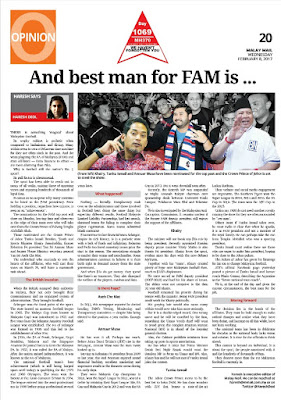 THERE is something ‘magical’ about Malaysian football.
Its trophy cabinet is pathetic when compared to badminton and diving. Many within seem to own a DeLorean time machine for they are often stuck in the past. And the woes plaguing the FA of Malaysia (FAM) and state affiliates — from finances to ethics — are more alarming than Zika.
Why is football still the nation’s No. 1 sport?
Its pull factor is phenomenal.
The sport has been able to reach out to many of all walks, uniting those of opposing views and enjoying hundreds of thousands of loyal fans.
It comes as no surprise why many continue to be lured to the FAM presidency. Even holding a position, regardless how minute, is seen as an “achievement”.
The nominations for the FAM top post will close on Monday, leaving fans and observers at the edge of their seats over who will take over from the Crown Prince of Pahang Tengku Abdullah Shah.\
Those nominated are the Crown Prince of Johor Tunku Ismail Ibrahim, Youth and Sports Minister Khairy Jamaluddin, former Kelantan FA president Tan Sri Annuar Musa and former Home Ministry secretary-general Tan Sri Aseh Che Mat.
The individual who succeeds to win the hearts of the affiliates, who will cast their votes on March 25, will have a mammoth task ahead.

When the British stamped their authority in Malaya, they not only brought their commissioners and an organised system of administration. They brought football.
Selangor was the focal point of the sport. The state hosted an amateur football league in 1905. The Malaya Cup (now known as Malaysia Cup) was introduced in 1921 and five years later the Selangor Amateur Football League was established. The FA of Selangor was formed in 1936 and this led to the establishment of other FAs.
In 1926, the FA of Perak, Selangor, Negri Sembilan, Malacca and the Singapore Amateur FA joined forces to form the Malayan FA. In 1933, it was called the FA of Malaya. After the nation gained independence, it was known as the FA of Malaysia.
The national football team’s best achievement (which is still being harped upon until today) is qualifying for the 1972 and 1980 Olympics. The team won the bronze at the Asian Games in Tehran in 1974. The league entered into the semi-professional era in 1989 before going professional several years later.

Nothing — literally. Complacency took over as the administrators and those involved in football kept doing the same thing but expecting different results. Football Malaysia Limited Liability Partnership, had last month, slammed teams for failing to complete their player registration. Some teams submitted blank contracts!
FAs continue to face financial woes. Selangor, despite its rich history, is in a pathetic state with a lack of funds and infighting. Kelantan and Perlis too faced monetary issues prior the start to this season. The associations struggle to market their teams and merchandise. Some administrators continue to believe it is their birth right to demand money from the state government.
And when FAs do get money, they spend like there’s no tomorrow. They also disregard the welfare of the players, coaches and fans.

Aseh Che Mat
In 2011, this newspaper reported he denied heading FAM’s Vetting, Monitoring and Transparency committee — despite him being elected to the position a year earlier. Enough said.

Annuar Musa
He has seen it all. Perhaps too much. Before Johor Darul Ta’zim’s (JDT) rise in the M-League, Annuar Musa was the man many looked up to.
Serving as Kelantan FA president from 2009 to last year, the Red Warriors enjoyed sound financial backing, excellent marketing and impressive results in the domestic scene during his early days.
They were Malaysia Cup champions in 2010, won the Super League in 2011, scored a treble by retaining their Super League title, FA Cup and Malaysia Cup in 2012 and won the FA Cup in 2013. But it went downhill soon after.
Recently, the Ketereh MP was suspended as Majlis Amanah Rakyat chairman over sponsorship deals between Universiti Kuala Lumpur, Pelaburan Mara Bhd and Kelantan FA.
He is also investigated by the Malaysian Anti-Corruption Commission. It remains unclear if the former FAM deputy president still enjoys the support of the affiliates.

Khairy
The minister will not break any Fifa rule by being president. Recently appointed Russian deputy prime minister Vitaly Mutko is also Russia FA president. Khairy loves the sport, evident since his days with the now-defunct MyTeam.
Together with his “team”, Khairy created plenty of hype over Malaysian football then, much to FAM’s displeasure.
He once served as FAM deputy president (2007-2010) and had his fair share of issues. The elders were not receptive to the then 32-year-old Khairy.
Football remained his priority during his tenure with the ministry. Being FAM president could work for Khairy politically.
His greying hair would also mean many within would now take him more seriously.
But it is a double-edged sword. One wrong move and he will be crucified by the fans, something the Umno Youth chief will want to avoid given the complex situation Barisan Nasional (BN) is in ahead of the looming general election.
Also, the Cabinet prohibits ministers from taking up posts in sports associations.
He has what it takes but Prime Minister Datuk Seri Najib Razak would want the Rembau MP to focus on Umno and BN. Also, Khairy has said he will not race if Tunku Ismail joins the contest.

Tunku Ismail
The Johor Crown Prince seems to be the best bet to helm FAM. He has done wonders with JDT that boasts a state-of-the-art Larkin Stadium.
Their website and social media engagement are impressive. The Southern Tigers won the Super League in 2014, 2015 and 2016, the FA Cup in 2016. The team won the AFC Cup in the 2015.
Critics say FAM do not need another royalty running the show for they are often surrounded by “yes-man”.
Others insist if Tunku Ismail takes over, he must make it clear that when he speaks, it is as FAM president and not a member of the royal family. He can perhaps take the cue from Tengku Abdullah who was a sporting president.
Tunku Ismail must realise there are those who are eager to make him president, hoping to be close to the Johor palace.
The Sultan of Johor has given his blessings for his son to change Malaysian football.
JDT’s official Facebook page yesterday posted a picture of Tunku Ismail and former coach Mario Gomez, describing the Argentine as the “future national team coach”.
He is, at the end of the day and given the current circumstances, the best man for the job.

Moving forward
The decision lies in the hands of the affiliates. They must be bold enough to make radical changes and realise what they have been doing, and harping on all this while, have not been working.
The national team has been in doldrums for decades as the national body lacks vision and mission. It is time for the officials to think ahead.
This contest is beyond an individual. It is about the sport, the people associated with it and the hundreds of thousands of fans.
They deserve more than the rut Malaysian football is currently in.