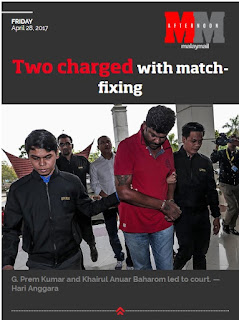 TWO former footballers were charged in the Sessions Court in Seremban this morning with two counts of offering bribes to two Malaysian Indian Sports Council-Malaysian Indian Football Association (MISC-MIFA) players involving RM20,000.
National player Khairul Anuar Baharum, 43, and Public Bank player S G. Prem Kumar, 49, claimed trial to both charges.
On the first charge, they are accused of offering RM10,000 to MIFA goal keeper Mohd Khairul Izzuwan Shaari to fix the outcome of the match, 0-2, between MISC-MIFA and Perak State Development Corporation on April 7, this year.
On the second charge, they are accused of offering RM10,000 to MIFA player S.Harivarman for the same purpose.
They allegedly committed the offences at Jalan Andalas 1, Senawang Light Industry Area in Seremban between 9pm and 10pm on March 27.
Deputy public prosecutor Nurdiyanah Mohd Nawawi represented the Malaysian Anti-Corruption Commission (MACC) while Khairul Anuar or ”Ah Chong” was represented by counsel Ridha Abdah Subri, and Prem Kumar, by Datuk Geethan Ram Vincent.
Judge Fathiyah Idris set RM10,000 as bail with one surety for each of the accused, and May 31 for remention.
The judge also ordered the duo to surrender their passports to the court and to report to the MACC office in Negeri Sembilan on the first Monday of every month pending disposal of their case. – Bernama
bookie football M-League Malaysia Malaysian Anti Corruption Commission match fixing MISC-MIFA