Where do we draw the line between 'having fun' and doing something silly? 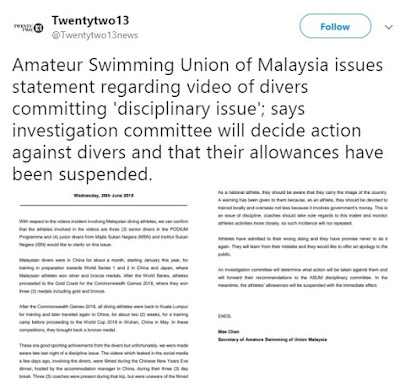 News website Twentytwo13.my had yesterday tweeted the Amateur Swimming Union of Malaysia's (ASUM) statement, confirming the involvement of three senior and four junior national divers of a "disciplinary issue" during their training in Guangzhou, China.

This comes following a video that made its rounds showing several divers allegedly "partying and drinking alcohol", as widely reported.

Smoking severely impairs a person's stamina - even more so for an athlete. Yet, it is obvious some of our athletes continue to smoke. I'm sure the experts (and test results) from the National Sports Institute know so (and will reveal so).

Alcohol when consumed excessively is bad for health too. But athletes of the yesteryear will tell you how they used to spend hours at watering holes after their matches / games, sometimes even catching up with sports journalists. And these were not your average athletes, mind you.

Perhaps such habits inspired studies into close ties between exercise and beer and even this article - '8 reasons athletes drink beer'. But I am no medical expert and will leave such scientific findings to the maestros.

Conspiracy theorists question the leaking of the video, filmed during Chinese New Year eve four months ago - wondering it is an attempt to smear the divers' reputation.

It's an open secret that all is not rosy in the diving camp.

So where do we draw the line between "having fun" and doing something silly?

However, salah tetap salah. When a wrong has been committed, those who committed the wrong must be prepared to face the music. And yes, what happened to the promised chaperone for female athletes - a subject raised years ago. 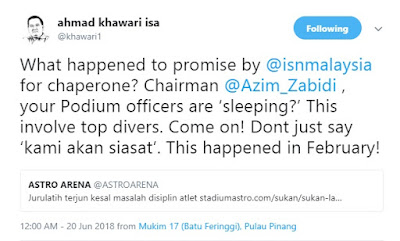 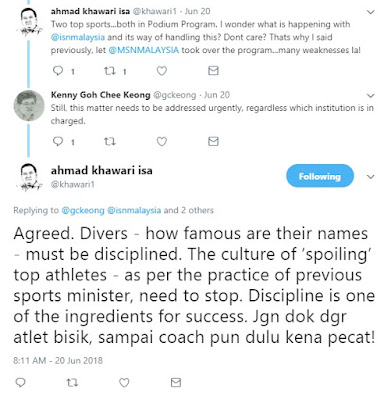 And just before I was about to finish off my drink, I read what former rhythmic gymnast Elaine Koon wrote on Facebook: 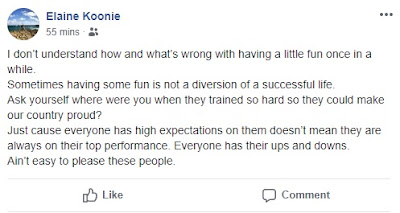 If you're wondering what I was drinking, it was a glass of milk.