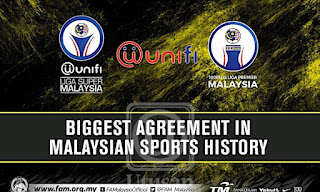 The conversations have been consistently about "bad economy" (or to some the 3Rs - rights, race and religion) since May 9 happened.

And now there are talks of Telekom Malaysia pulling out as the title sponsor of the M-League. This despite having signed a lucrative deal with the guardians of the Malaysian football league - dubbed as the "biggest agreement in Malaysian sports history worth RM480 million (RM60 million over eight years).

Telekom Malaysia's (TM) Unifi brand is the new title sponsor for the Malaysian Super League and Malaysia Cup in a collaboration with Football Malaysia LLP (FMLLP) until 2025.

TM’s premier convergence brand Unifi will also co-sponsor the FA Cup as the eight-year agreement, beginning this season, marks TM’s continued support towards local football development and uplifting the standard of sports in the country.

With the sponsorship, the league is now known as “Unifi Liga Super Malaysia” and the cup is named “Unifi Piala Malaysia”.

Such talks come as TM recorded its first quarterly loss in 10 years "due to huge impairments on its wireless and fixed network assets". Read the full article here.

Those in the know have been rather tight-lipped over the matter. But their grim faces say it all.

If true, the predicament paints a bleak future for Malaysian sports as most associations have already been told to seek help from the private sector as government budgets are being slashed due to the current economic climate. This was once again established by the Deputy Prime Minister Datuk Seri Dr Wan Azizah Wan Ismail during the Olympic Council of Malaysia's 25th Annual Dinner and Awards Night on Wednesday.

Bernama seems to believe that despite the stiff challenges faced by TM, including its shares  the general perception remains that the company will be able to ride the turbulent times and retain its top spot as the leading telecommunication company in Malaysia.
Read 'TM will overcome challenges given its experience, infrastructure'.
Everyone is claiming the economy is bad - while sipping on their overpriced latte before planning for a trip to Europe or Japan or buying the latest Proton X70. Hmmm ….
football M-League Telekom Malaysia