And we wonder why our athletes lack character ... 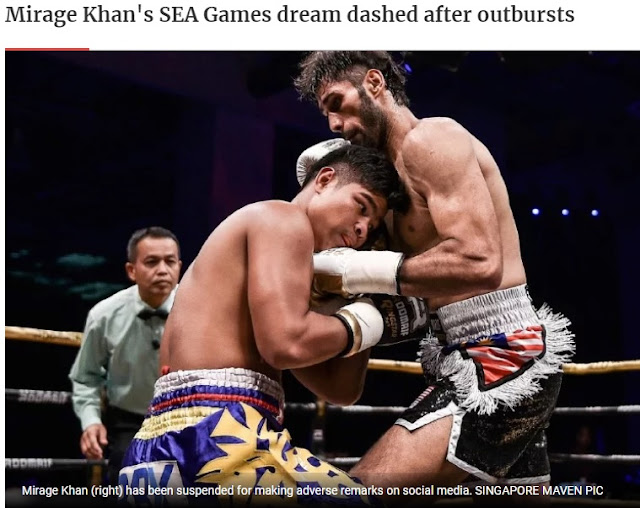 ... because they just can't seem to express themselves.

1. Character is important in sports. It builds confidence and ownership of an athlete to the sport. Basically, those who ooze character are passionate about the sport they represent.

2. But there is obviously no place for rude athletes, regardless how good they are. Having said that, it is no rocket science to single out an "arrogant / harmless" comment compared to a downright "rude" comment.

3. Athletes speaking out against organisations or even world federations are not new. They are entitled to speak for they are the reason the sport is alive - not the officials.

4. In March, all 28 members of the current US women's football team sued the US Soccer Federation for gender discrimination. The same month, Athletics Kenya lambasted a decision by the International Association of Athletics Federations (IAAF) to scrap the 5,000 metres from the Diamond League programme as “illegitimate”. At last year's US Open, Serena Williams was fined $17,000 was calling an umpire a thief and a liar in the final. She was not suspended for expressing herself as her outburst drew sympathisers and critics alike.

5. Back home, Sambo Malaysia athletes were informed they will not see action at the year end Manila SEA Games, even under B2 category (self funded, no reimbursements if medal won). Sambo athletes were denied a ticket to the regional Games because they were accused of not having development at the grassroots. But Malaysia Sambo Association insists there is development at the lower levels.

6. This led to Sambo exponent Mirage Khan expressing himself on social media. He apparently said:

“I don’t understand why OCM are not allowing the athletes (sambo) to participate in the Games.
“I am not asking for funding from the country, I am paying for it myself, and when I win the gold medal, it will count in the total medal tally for Malaysia.
“I won’t be able to claim anything from the National Sports Council (NSC). As unfair as it is, I still agreed to compete even when there is nothing in (it) for me.
“Now they (OCM) are denying the whole team from going (to the Games)? It clearly looks political.
“OCM, whatever grudge you have with Sambo Malaysia or any of the staff, that is between you guys. Please don’t let the athletes become the victims of your war.”

7. Judging by the statement that was made available in New Straits Times Sept 11 article, it reads as an expression by a frustrated athlete who was looking forward to represent his country. But his dreams have been dashed. No where in the statement seems to suggest Mirage was speaking on behalf of Malaysia Sambo Association.

8. Yet, Mirage was suspended for "misconduct" due to "numerous complaints made against Mirage for his remarks on social media". There is clearly nothing defamatory or rude about the comment.

9. Today, the New Straits Times reported that a remorseful Mirage has pleaded for forgiveness to allow him to compete in the Manila SEA Games as a change of heart will now see Sambo athletes compete in Manila.

10. Mirage who has "repented and corrected all his mistakes" is a silver medallists at the 2012 Asian Wushu Championships and Sanda World Cup who was considered a bright medal prospect as Sambo debuts in the Manila SEA Games.

11. It is sad that athletes who express themselves due to their passion are being forced to say sorry to earn a medal for the country.

12. It is also mind boggling athletes here seem to be suppressed by officials who do little or no sports at all - not understanding the true characteristics of sportsmanship, the drive, motivation and confidence building.

13. Mirage made a point. And if any party was slighted by it, he or she should have made his or her feelings known, find a solution and move on. After all, the sport is bigger than any individual.

14. Mirage, despite being a medal contender, is forced to ask for forgiveness to compete in a regional meet that will aid Malaysia's prospects in the overall medal tally. This is so wrong.

15. And we then wonder why our athletes lack character. Perhaps for athletes these days, silence is golden. And such silence will eventually kill the enthusiasm, "ownership" and even passion an athlete has over his or her sport.