HARESH SAYS
By Haresh Deol
I BECAME a father on Oct 24.

Having been by my wife’s side every step of the way, we were blessed with our bundle of joy, a baby boy, just days before Deepavali.

Our journey to parenthood was made easy thanks to one man — Datuk Dr Alex Mathews.

A well-known figure in the fraternity and beyond, the former Obstetrical and Gynaecological Society of Malaysia president (1993/1994) comforted us every step of the way through his fatherly-like approach.

The well-groomed tie-wearing doctor, who could pass off as a headmaster, has a keen interest in sports. Having served the government for many years, his experience and wisdom are evident not only through his greyish hair but from his choice of words (and intonation), reassuring patients they are in good hands.

I, had on our first visit to his clinic, asked if it was fine for Mrs to join me on a ride to Koh Lanta, Thailand. I promised we would stop at many places along the way to break the 800km-odd journey to which Dr Mathews replied: “There is no scientific evidence to prove long rides during such an early stage of pregnancy would cause harm. But as a father, I would say ‘no’.”

We drove to Kuantan for a short break instead. 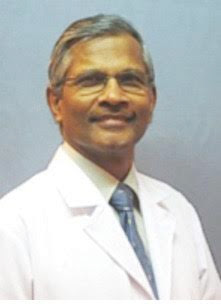 A religious man, Dr Mathews (pic) treated everyone with respect, especially the nurses. Even medical representatives of pharmaceutical companies hold him in high regard.

However, not all of us have had pleasant encounters with doctors and medical staff.

Malay Mail reader Ramesh Singh, had on Oct 21, vented his frustration after his father-in-law was asked by a doctor in Selayang Hospital to hand-deliver his blood sample to a private laboratory.

“My 75-year-old father-in-law needed a cancer marker test before his CT scan. When they drew the blood, they passed it to my wife, who had to deliver the sample and was charged RM136.60 for it,” he said.

“She then had to pick up the results and only then could my father-in-law get the CT scan done. This is shameful, how are we taking care of our people if things like this cannot be sorted out?”

It is dumbfounding for a doctor to ask a patient to send his blood sample to an independent laboratory instead of the hospital arranging to do this. Delay in the transportation of blood samples to the laboratory may cause alteration in test results.

What if a patient decides to park his car under the sun with his blood sample in his glove compartment to enjoy banana leaf rice before heading to the laboratory? What about the poor and disabled who either cannot afford such tests or are unable to travel from one corner to another?

Ramesh’s nightmare did not end there.

His father-in-law, who hails from Taiping and travels to Kuala Lumpur for his routine check-ups, returned to the hospital for another appointment last Wednesday only to be told his 24-hour urine sample test was not carried out despite giving his sample on Oct 18.

The doctor instead referred to a test result taken last month, much to the chagrin of the patient.

When Ramesh asked if the ministry was facing shortage of funds and they were incapable to carry out such tests, the nephrologist nodded her head and replied: “Go ask (Prime Minister Datuk Seri) Najib (Razak).”

Some may argue it is unfair to compare private and government medical staff. You pay for good service, they say. But I beg to differ. There are those in the private service who are not fit to be doctors or nurses. And there are government medical personnel who serve with plenty of zest.

Medical staff have an obligation to serve all patients — rich or poor. Doctors, in the private or government sector, must uphold the sacred Hippocratic Oath.

Frustrated doctors should voice their grouses to their superiors instead of turning patients into punching bags or adopting a tidak apa approach. Doctors who climb the ladder and become managers must address grouses by their fellow doctors and not turn into politicians.

Some claim doctors are doing more paperwork than attending to patients, and that the doctor-patient ratio at government hospitals is ridiculous.

Others say they are frustrated with budget cuts as they are unable to comprehensively examine  patients.
A circular from a government hospital revealed among the tests axed since last month were torch serology/toxoplasma, rubella and herpes, repeated tests for patients reactive for HIV, Hepatitis B and Hepatitis C, stool for rotavirus antigen and haemoglobin analysis.

“Government doctors are overwhelmed and not appreciated so some of them take it out on patients. I am not surprised that many doctors and patients at Selayang Hospital are frustrated that many tests had to be scrapped because of budget cuts,” said a medical representative from a pharmaceutical company.

“The budget cuts have opened the doors for China products that have no clinical evidence into our hospitals. These products are sourced from China and packed locally,” a manager of an international medical
company added.

But a doctor had this to say: “Budget cuts or not, a doctor is a doctor … regardless government or private, he or she should treat all patients with respect and explain their health situation to them. Patients are already sick and need reassurance, not to be further agonised.”

He said hospital authorities must find ways to deal with the budget cuts and train their doctors to comfort patients, especially the elderly and the poor, so that their well-being is not compromised.

If the authorities can set aside their egos, perhaps they can learn from the likes of Dr Mathews and his contemporaries on ethics and establishing a healthy doctor-patient relationship.

The ministry should be mindful about the woes faced by the public and the government must realise healthcare is one sector that can never be compromised.

While the policy makers continue their battle to improve healthcare services, doctors can help ease the pain by injecting courtesy while treating the sick. The right words can make a lot of difference.

Doctors, and medical staff in general, ought to realise such good traits will go a long way.