HARESH SAYS: Local councils must clean up their act 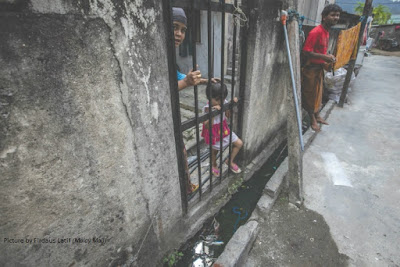 Rats run around as mosquitoes breed in stagnant waters.

Children, some learning to walk, play in such unhygienic conditions.

This sums up the living conditions of the pockets of refugee communities in Ampang. Mostly from Myanmar, they live in small houses and make do with what little they earn from carrying out odd jobs.

Those staying there are mostly illiterate. They know many among them are sick and some have died. To them, it is a way of life.

Heading to the nearest hospital — Ampang Hospital — is a pricey affair. They instead rely on advice by sinseh who run traditional medicine shops nearby their homes.

Malay Mail Afternoon, on Jan 11,  highlighted a possible rotavirus outbreak among the community in Ampang following the death of a 15-month-old baby on Dec 26. Another four children, between the ages of six months and three years were admitted to Ampang Hospital for the disease.

All of them were from Taman Bukit Teratai and Taman Mega Jaya.

Deplorable living conditions were seen at Kampung Tasik Permai and other surrounding areas.
Rotavirus can easily spread in such conditions.

The foreigners told our reporter and photographer many in their community were “sickly” with one saying her husband died recently from tuberculosis.

The sense of urgency by the authorities, however, is almost non-existent.

Ampang Jaya Municipal Council, who claimed to have sent its personnel to the areas, said they had yet to receive a report from the Health Ministry and state health department.

Why can’t the local council clean up the area?

Why didn’t the ministry or state health department notify the council regarding the death and other cases?

Didn’t anyone see the need to inform members of the public and residents living in those areas regarding the cases take precautionary measures?

The local council, too, did not see the need to engage with the media regarding the matter.
A phone call was made to the council’s public relations officer  Norhayati Ahmad on Friday at about 10.30am. She said she was at a meeting and would call back. She never did.

On Monday, another call was made at 8.58am. When asked what steps were taken by the council, she merely said they were awaiting reports from the health authorities.

She confirmed a team was sent to the site and offered no apology for failing to return Friday’s phone call. So much for public relations.

One wonders how the council attends to complaints, grouses or questions raised by residents.
Even worse, those managing the council’s Twitter account (@mp_ampangjaya) tend to block those who raise matters concerning Ampang — very unbecoming for a local authority.

It clearly shows the council lacks the experience or expertise in dealing with issues.

It is the task of local councils to serve the people and not the other way around. They must be proactive and be seen eager to safeguard the welfare of ratepayers.

The council must learn how to engage with the press and the people. It’s not about offering kuih-muih during press conferences or lip service over the phone. It’s about providing answers to queries and ensuring problems are solved quickly and effectively.

The ministry and state health department are also responsible in notifying the people about potential outbreaks in any area or state. It is not about creating fear or panic but keeping people informed at all times.

Residents have the right to know what is going on in their neighbourhoods.

All communities, local or foreign, must play their part in keeping their surroundings clean at all times.

The Ampang Jaya Municipal Council must proactively engage with the people beyond their weekly cooking and baking classes.

Other local councils should also not take their ratepayers for granted. They need to clean up their act.
A rotavirus outbreak, which originated from the Bukit Merah Laketown Resort, near Taiping, last year, affected over 50 children and adults.

We cannot and must not allow a similar situation to happen again.