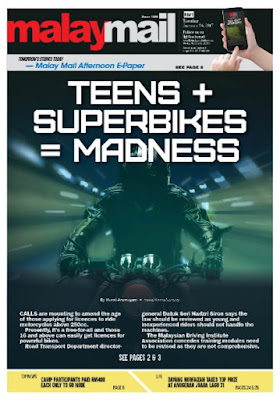 HE slaps on a helmet, with hardly any padding within, and does not see the need to buckle up.

In shorts and slippers, he sits on his bike — minus rear view mirrors — and goes full throttle paying little attention to his surroundings.

Sounds like a Mat Rempit on a kap chai? Not exactly.

Even those who own high-powered machines are guilty of such practices.

Why is it that motorcyclists, riding on big or small bikes, generally disregard safety? Some say suiting up is an expensive affair despite cheaper alternatives. Others blame it on our weather, saying it’s too hot to wear jacket and gloves while there are those who don’t see the need to wear such attire due to the short riding distance.

Then there are those who say they are mocked by their peers when they suit up — this is especially so among those who ride small bikes.

But the disregard of such safety and bad riding practices has contributed to the large number of accidents and deaths involving motorcyclists.

Without doubt, the increase of traffic population — mainly encouraged by affordable vehicles and new expressways— has contributed to the rise in the number of accidents. And other errant motorists too are guilty of causing these accidents.

There were over 6,000 deaths on Malaysian roads last year — an average of 20 deaths daily. And most who died on our roads were motorcyclists and their pillion riders.

This despite the numerous road safety campaigns such as Ops Selamat.

Bukit Aman traffic statistics revealed 39,744 motorcyclists and pillion riders were killed in road accidents between 2005 and 2014.

More alarming is how easy it is to purchase superbikes these days.

Some traders even offer 100 per cent loans for up to 20 years for civil servants!

Also, our riders are not giving the right training to handle motorcycles — big or small.

Unlike the mandatory road test taken by car and other motorists, bikers are only evaluated within the circuit at the driving school. If they pass that, they get their probationary licence.

There are many basic elements missing from the training modules — how to put a 300kg motorcycle on its centre stand, how to carry a bike when it drops, and defensive riding.

Safety too should be drilled in the heads of riders of big or small bikes. The need to buckle up when using a helmet and wearing the right attire should be emphasised thoroughly.

More importantly, young and new riders should not be allowed to operate high powered machines unless they are under strict supervision and ride in a controlled environment.

It is high time for the lawmakers to re-evaluate the age limit of those intending to ride big motorcycles and for driving schools to update the training modules.

Riders must get a taste of what it is like riding on the roads so that they would not take safety for granted.

Riding is not a video game where the restart button is readily available. One wrong move, and lives can be lost.

Haresh is executive editor of  Malay Mail and has been riding motorcycles for the past 17 years. He can be reached at haresh@mmail.com.my or on Twitter @HareshDeol.
haresh deol Haresh Says motorcycles Road Transport Department superbikes