FAM in limbo over Pyongyang match 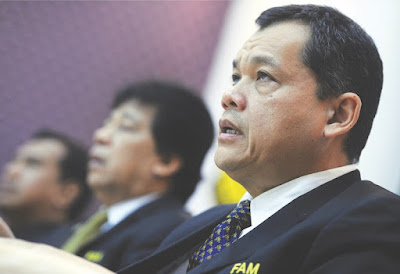 KUALA LUMPUR — The FA of Malaysia (FAM) will “exhaust all options” after it was decided the national team will play North Korea in the 2019 Asian Cup qualifiers in Pyongyang next month.

The decision, made by the Asian Football Confederation (AFC) on Monday, sent jitters down the spines of several parties as this will be the nation’s first official visit to the hermit kingdom following a diplomatic row between both countries.
China, South Korea and the United States were also at the edge of their seats following threats of nuclear missile tests by the rogue state.
FAM general secretary Datuk Hamidin Amin, who was in Bahrain for the annual Fifa Congress, said he would speak to FAM president Tunku Ismail Ibrahim on their next move ahead of the match.
“We are concerned. The first thing I’ll do when I get back is to meet Tunku Ismail and get his views. We will exhaust all options,” Hamidin said.
“We met representatives from Wisma Putra and the Youth and Sports Ministry about two weeks ago. We informed AFC what was discussed,” he said without elaborating.
“I would rather we play in a neutral venue … we will appeal (against the decision to play in Pyongyang) first.”
It was learnt Hamidin and AFC general secretary Datuk Windsor Paul John would meet on the sidelines of the congress to discuss this matter.
Sources said the match in Pyongyang on June 8 leaves Malaysia in a fix and there are attempts to ensure the match would eventually be played elsewhere.
“It’s a complex situation that many don’t understand. We can’t say don’t go as it could offend North Korea,” the source said.
“At the same time, we can’t be just sending our footballers there hoping everything will be fine.
“None of the Malaysian embassy staff have returned to Pyongyang.”
Another insider revealed FAM was repeatedly “advised not to go” following their last meeting with representatives from Wisma Putra and the Youth and Sports Ministry.
“FAM conveyed this to AFC but confirmed there is no travel ban imposed by the Malaysian government.
Malaysia was one of the few nations to establish diplomatic ties with North Korea.
The relations, however, soured following the assassination of Kim Jong-nam at klia2 on Feb 13.
Police said the assassins used VX nerve agent, a chemical listed by the United Nations as a weapon of mass destruction, to kill the estranged half-brother of North Korean leader Kim Jong-un.
The government imposed a travel ban after a diplomatic row escalated but it was lifted late March.
This was after Putrajaya and Pyongyang reached a deal that saw the return of 11 Malaysians, including embassy staff and their families, to Kuala Lumpur while several North Koreans holed up in its embassy in Damansara Heights and Jong-nam’s body were transported to North Korea.
Deputy Home Minister Datuk Seri Reezal Merican Naina Merican said there was no travel advisory to North Korea but “those wanting to go there should seek advice from the ministry”.
He did not want to comment about the match, adding he was not privy to discussions pertaining the matter and that it was “best to speak to Youth and Sports Minister Khairy Jamaluddin”.
Khairy said he respected AFC’s decision despite repeated requests to play the match elsewhere.
Harimau Malaya was scheduled to play the Group B game against the North Koreans at the Kim Il-sung Stadium on March 28, but the match was postponed.
FAM had then requested AFC that the match is played at a neutral ground.
“Pyongyang has assured us our players will be safe. But North Korea also has issues with other nations and they need to reassure us that the safety of our team will not be compromised,” he said.
“I hope the match will go on smoothly and our players return safely.”
2019 Asian Cup Asian Football Confederation FA of Malaysia football Hamidin Amin kim jong nam Malaysia North Korea Pyongyang