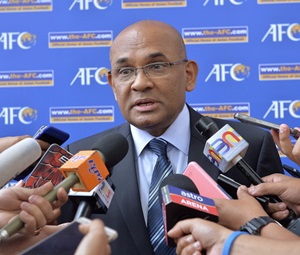 By Haresh Deol
KUALA LUMPUR — Asian Football Confederation (AFC) general-secretary Datuk Windsor Paul John said Malaysia will play their Asian Cup qualifying match in Pyongyang, as the government has not imposed a travel ban to North Korea.
Responding to claims the FA of Malaysia (FAM) may appeal against the decision to play the June 8 match in the hermit kingdom, Windsor said: “They are free to do so.
“I’m not the one making the decision. The committee will decide and FAM must justify their appeal, if they intend to do so that is.”
Windsor said it was AFC, and not the Malaysian government, who would assess the security situation in Pyongyang.
“We will assess the situation there two weeks before the tournament. The AFC Women’s Asian Cup was held in Pyongyang … we had players and officials from all over the world there. Everything went well.”
According to AFC regulations, Windsor said a match could only be played in a neutral venue if:
• Stadium declared suspended — Fifa has suspended stadiums in Iran, Yemen, Syria and Afghanistan due to constant turmoil there.
• Force majeure — the stadium or nation is unfit to host any matches.
• Travel ban.
Windsor said FAM wrote to AFC confirming there was no travel ban to Pyongyang.
Asked of the repercussions if Malaysia decided not to play the match, Windsor said: “If that happens, the matter will be brought to the disciplinary committee. The worst scenario could see the Malaysian team suspended from the tournament
2019 Asian Cup Asian Football Confederation FA of Malaysia football Malaysia North Korea