Another stadium to make way for development

July 10, 2017
UPDATE 8.40pm: City Hall has agreed to meet KLBA "soon" over the status of the badminton stadium in Cheras.

The development of the land was also reported by Astro Arena during its evening bulletin. 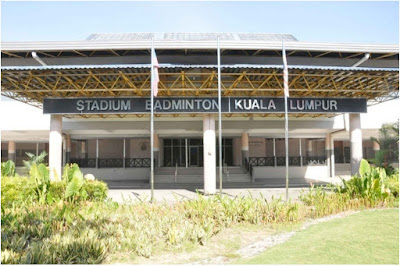 BADMINTON enthusiasts hope those involved in the redevelopment project at Jalan Cheras will honour their promise in reconstructing the Kuala Lumpur Badminton Stadium.

This comes following news Mah Sing Group Bhd had bought the land housing the 27-year-old stadium that has a capacity of 4,500.

Mah Sing told Bursa Malaysia on July 3 it signed a share sale agreement with Hazreeq Putra Hasman and Maslinda Othman for their shareholding in Cordova Land Sdn Bhd,a company which has secured the acceptance of Kuala Lumpur City Hall for the purchase of an 11.233-acre piece of land in the area for RM82.127 million.

Star Biz reported: "Pursuant to the proposed acquisition of the land, Mah Sing will have to reconstruct the surau, Kompleks Belia Bandaraya and badminton stadium."

KLBA president Datuk Seri Jahaberdeen Yunoos, in a letter to mayor Datuk Seri Mhd Amin Nordin Abd. Aziz in May, requested the developer provide an alternative training venue to ensure the association's development programmes will not be disrupted.

A copy of the letter, received by the mayor's office on May 24, was sent to Badminton Association of Malaysia patron Datin Seri Rosmah Mansor. 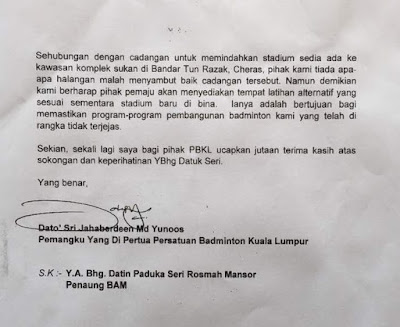 This is not the first time a playing venue in the city is being forced to make way for redevelopment.

The Kuala Lumpur Velodrome,located some 1.5km from the badminton stadium, hosted its last race in March as the land, bought by textile giant Jakel, has also been slated for redevelopment.

Several Bandar Tun Razak residents had recently questioned the sale of a land reserved for football for the construction of a high-rise residence. They lodged a report against City Hall with the Malaysian Anti-Corruption Commission, as reported last month. 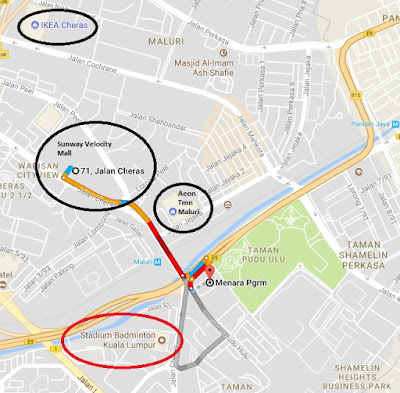 Jalan Cheras and parts of Bandar Tun Razak are the latest hottest addresses in Kuala Lumpur with a large number of shopping malls, condominiums and business centres being built.