Where's the planning, who do we blame? 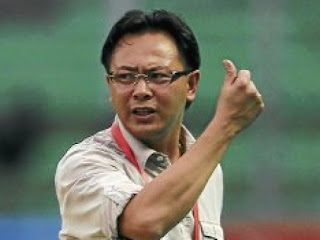 It was all over the Internet yesterday and hogged the backpages of most dailies today.

Only six footballers turned up on the first day of centralised training yesterday, ahead of the AFC Under23 Championship scheduled to start on July 19 in Bangkok.

The remaining 20 players who were called up by coach Ong Kim Swee (pic) will come in batches.

Teams who did not release their players yesterday have created the presumption it is they who call the shots and not the national body.

1. National coaches met late last year to discuss the 2017 calendar. All were aware of tournaments scheduled for 2017.
Why:
- didn't the guardians of the domestic league take into account our international obligations? For the record, AFC generally prepares its calendar two years in advance.

2. Kim Swee, his assistants and the six players who reported for duty pretty much wasted their time yesterday.
Why:
- should the six players and coaches continue to waste their time? They might as well gather only when all 26 report for centralised training.

3. We have seen similar episodes in the past, where clubs/ state teams were reluctant to release their players for national duty.
Why:
- hasn't anyone addressed this?

4. If we fail in the qualifiers and SEA Games, who will be blamed?

How do we move forward?
It's as simple as planning in advance and sticking to the plan.

If we can't even get that right, let's not dream of hosting the World Cup one day. We could see M-League matches being played during the World Cup (and I'm being sarcastic here).
AFC under23 Championships football Ong Kim Swee Sea Games