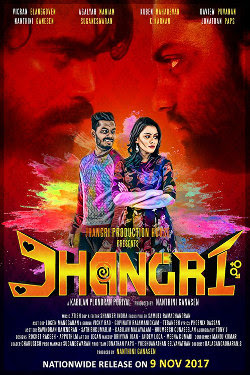 Once again local movie producers are left in a limbo due to the lack of screen time in the cinemas.

Jhangri, which means sweet, opened on Thursday (Nov 9) with its first show at noon. 22 cinemas showed the movie. 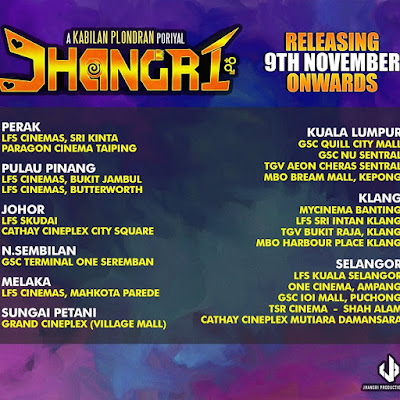 The movie obtained good reviews, as seen on its Facebook page. It was full house at NU Sentral on Sunday (8.20pm show). Some expressed their disappointment of not being able to watch the movie, as posted by Boggler Blogger on Facebook.

Despite the positive reviews, the movie will only be shown at the 22 cinemas till Wednesday.

Issues:
Reduction of cinemas:
From 22 cinemas, only 14 will screen the movie starting Thursday. The cinemas that will stop showing Jhangri include those located in Seremban and Puchong which are deemed "important locations" for the producers.

Out of this 14, the producers are looking at a possible further reduction of another four cinemas which will bring the total number to 10.

Showtime:
Opening days for local Tamil movies are apparently scheduled on Thursday (at noon). This according to Jhangri producer Nanthini Ganasen such a timing is ridiculous - with it being a weekday.

She said it is only fair for local movies to get at least two screen times at night on a weekday - to cater for the working crowd. The fans are starting to flock the cinemas to watch Jhangri based on the reviews and now was not a good time to reduce the number of screen time, Nanthini added.

"If the movie is boring, then I wouldn't be complaining. But we have been getting good reviews and people want to watch Jhangri. We are already competing with big budget Kollywood movies and now we have to compete with the timing. Foreign movies get the best timing."

She pointed out foreign Tamil films are generally screened for three weeks while the screen time for local Tamil movies are reviewed after three days of screening.

"Our first two days were on Thursday and Friday. How are we expected to get a good crowd when the movie is screened at noon and 4pm on weekdays? Give us at least three weeks of screen time and don't allow the release of a Kollywood movie and a locally produced movie on the same day."

"Look at China and South Korea. They prioritise local movies. Why can't we do the same here?" she asked.

"Even the director is only 27 years old. We are not even asking for money. We are just demanding for a level playing field."

The team behind Jhangri are planning for a press conference tomorrow, Nov 14, at 11am, MIC Headquarters, Kuala Lumpur to highlight their issue.

The issue faced by the folks who produced Jhangri, now a hot topic among industry players, is not new.

Many are reminded about the 2015 movie Jagat which suffered a similar episode in the beginning but went on to win the hearts of many and was declared the Best Malaysian Film at the 28th Malaysian Film Festival.
cinema Jhangri kollywood movie