November 14, 2017
"You can bring the best coach in the world to Malaysia but he still won't be able to change our fortunes so soon.”
This is the view of football great Datuk Shukor Salleh who feels it is unfair to blame national coach Nelo Vingada for Malaysia’s failure in the Asia Cup qualifiers.
He said the national team lack international quality and will take time to develop.
Read the full report in NST Online.
Right after the 2019 AFC Asian Cup qualifier between Malaysia and North Korea ended last night, my commentary on the national team was published by The Mole.
I said that what we see today is the result of a failed system.
Echoing similar sentiments is former Kedah coach Azraai Khor Abdullah.
“Yes, you are right. Don’t blame the FA of Malaysia (FAM) president (Tunku Ismail Ibrahim) or the coach (Vingada). Our system has failed and the rot starts at the grassroots.”
I also took issue with state FA officials who go on to secure positions in the FA of Malaysia but did little to develop the sport.
Many who occupy positions within the state associations have vested interest. Some are only interested in securing a position at the state level as a ticket to be a decision-maker in FAM. The national body, after all, consists of the state FAs.
Not many within the state FAs are zeroing in on football at the lowest level.
Till today, funds — mostly tax-payers’ money obtained from state governments — are generally wasted on teams competing in the M-League. Little is allocated to the junior squads and for grassroots development.
There seems to be little focus or vision at the state level. No Key Performance Index (KPI) is set or revealed, allowing officials to do as they please until the next election.
The lack of focus is apparent but these officials, some hogging positions for decades, tend to get away with murdering Malaysian football.
Read the full commentary, which was the most viewed article followed by Pearl Lee's commentary on the Penang floods aftermath,  here. 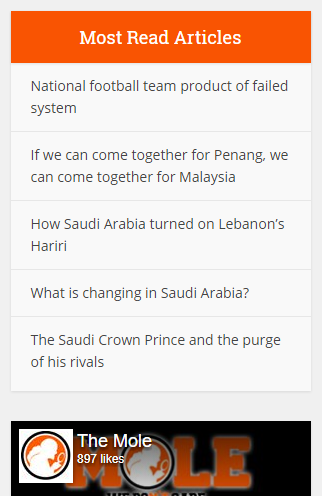