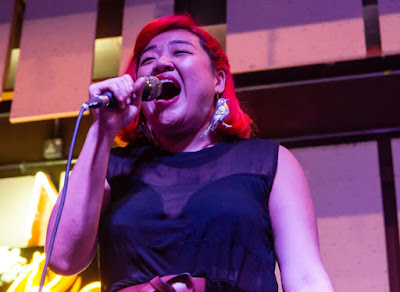 HER flaming red hair stood out among her peers on stage.

There stood Bihzhu (pic above) in her bubbly self. The fingers of the bassist and guitarist ran wild all over the frets but just as the Penangite sang, my left foot was already tapping to her jazzy tune.

Halfway through her performance during Moonshine at Publika last Wednesday, I asked myself why such songs do not enjoy airtime on radio.

Amir Jahari was next. The young Kuching lad went on to play several yet-to-be recorded songs, impressing those who attended the show. The others who performed that night included Bil Musa and Narmi.

I joined Amir after he performed and asked him how life had been in the scene.

“Bolehlah,” he said with a smile.

“I’m not making much, but it’s enough to put food on the table, pay the bills and do what I love doing … singing.”

Amir, who turned 23 on May 31, has come a long way since busking in the streets of Kuala Lumpur. The self-taught musician has impressed many through his blend of folk, country, jazz and simple pop music.

Unlike most of his peers who performed on stage, Amir (pic below) has had his tunes played on radio. Songs like Tanpamu and Penghibur Jalanan are among those that have secured spots in the local charts. He even made an appearance during Anugerah Juara Lagu 27. 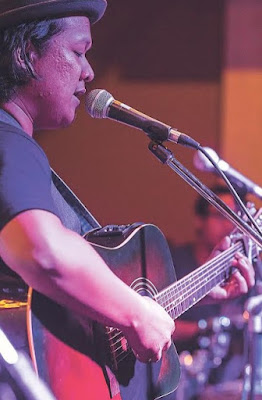 But Amir, just like many other talents out there, is dying for support. They make good music but good is not enough, says his manager Joe Lee. Joe is no stranger to the media fraternity and was once a Malay Mail journalist.

“Just look around you,” he said pointing at several young musicians after the show.

“These are real talents. You may not hear or know of them but they have performed with some of the biggest names in the local music industry. If only more people know about them.

“I’ve told Amir he must make a name for himself by 25. The only way to move forward is to make a name outside Malaysia. We don’t need another jaguh kampung. We need more artistes like Yuna and Zee Avi, who have made a name for themselves by themselves.”

Yuna has performed at the Lollapalooza and Bonnaroo festivals, and appeared on The Tonight Show with Jay Leno. Zee Avi, another Sarawakian talent, has headlined several shows including San Francisco’s Noise Pop, Austin’s South by Southwest and Mountain Jam in New York. 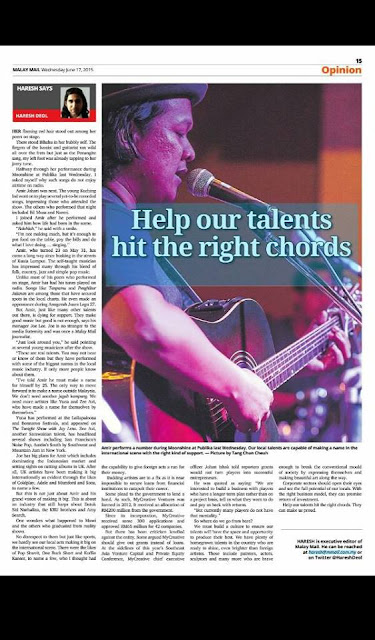 Joe has big plans for Amir which includes dominating the Indonesian market and setting sights on cutting albums in UK. After all, UK artistes have been making it big internationally as evident through the likes of Coldplay, Adele and Mumford and Sons, to name a few.

But this is not just about Amir and his grand vision of making it big. This is about an industry that still harps about Datuk Siti Nurhaliza, the KRU brothers and Amy Search.

One wonders what happened to Mawi and the others who graduated from reality shows.
No disrespect to them but just like sports, we hardly see our local acts making it big on the international scene. There were the likes of Pop Shuvit, One Buck Short and Koffin Kanser, to name a few, who I thought had the capability to give foreign acts a run for their money.

Budding artistes are in a fix as it is near impossible to secure loans from financial institutions to catapult their career.

Some plead to the government to lend a hand. As such, MyCreative Ventures was formed in 2012. It received an allocation of RM200 million from the government.

Since its incorporation, MyCreative received some 300 applications and approved RM65 million for 42 companies.

But there has been criticism levelled against the entity. Some argued MyCreative should give out grants instead of loans. At the sidelines of this year’s Southeast Asia Venture Capital and Private Equity Conference, MyCreative chief executive officer Johan Ishak told reporters grants would not turn players into successful entrepreneurs.

He was quoted as saying: “We are interested to build a business with players who have a longer-term plan rather than on a project basis, tell us what they want to do and pay us back with returns.
“But currently many players do not have that mentality.”

So where do we go from here?

We must build a culture to ensure our talents will have the space and opportunity to produce their best. We have plenty of homegrown talents in the country who are ready to shine, even brighter than foreign artistes. These include painters, actors, sculptors and many more who are brave enough to break the conventional mould of society by expressing themselves and making beautiful art along the way.

Corporate sectors should open their eyes and see the full potential of our locals. With the right business model, they can promise return of investment.

Help our talents hit the right chords. They can make us proud.

HARESH is Malay Mail executive editor, He can be reached at haresh@mmail.com.my or on Twitter @HareshDeol