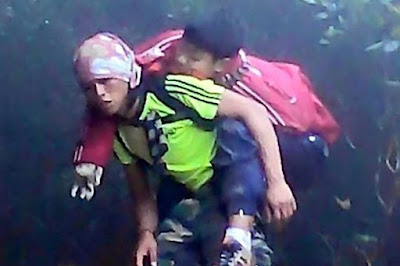 I THOUGHT I had given up hope on humanity. I was convinced generosity and even common etiquette had disintegrated over the years.

With news of corrupt practices, abuse of power, lackadaisical attitude and greed constantly highlighted, we seem to live in a selfish society that believes in ‘I’ rather than ‘we’.

But Aliyah proved me wrong.

I was with my better half at a mall in Taman Maluri on Monday where the missus decided to buy a silver chain and some other items.

She bought a chain she liked and we went to two other outlets before leaving the mall. Hours later, we realised missus had misplaced the bag of items which we bought from the first store.

She quickly called the store and Aliyah answered. The young salesgirl insisted the bag was not in the store. Wifey explained she went to two other stores after buying the chain.

Aliyah, out of her free will, said she would check and asked missus to call again in 30 minutes.

When she called again, Aliyah said: “Miss, I found your bag. You left it at the personal care store that you last visited.”

We returned to the outlet, got our items and thanked Aliyah. We repaid her kindness by buying her a cheese cake, which she accepted with a big smile on her face.

This young woman went out of her way to find the misplaced bag. It may only be a silver chain and she could have given us the typical “tak tahu” (I don’t know) answer. But she didn’t.

Aliyah from Dragon Silver made our day. And it served as a good reminder — that there are many out there who are able to prove me wrong. There are many ‘heroes’ among us who work their magic to keep us safe and sound, to help us out in time of need and who pacify our fears.

They come in all shapes, colours and sizes. They can be a taxi driver, a policeman or even a mountain guide who is willing to risk his life saving hikers on Mount Kinabalu.

Having climbed the mountain years ago, I know how caring the guides and locals are when dealing with visitors. From simple advice by asking us to do away with fancy boots and to slap up a pair of ‘kampung adidas’ shoes to ensuring no one was left behind when we travelled in a group — they were there for us all the way.

They never once whined or griped if there was a problem as they facilitated us in our once in a lifetime quest. They had plenty of stories to tell and were even willing to share food and water.

The tributes that poured in, honouring these unsung heroes following last Friday’s earthquake in Ranau, are of no surprise. These malim gunung deserve the recognition.

While we may live in a crude and cruel world, we must appreciate there are those around us who are willing to go the extra mile for others.

These people have changed lives and will continue to do so in their own way.

They are an inspiration and prove that humanity still exists, that compassion and love are very much alive in our daily lives.

I salute all our everyday heroes out there — your contributions, no matter how small, have and will make a difference.

It is time we open our eyes and appreciate the wonders of people.

The sooner we acknowledge their good work, the sooner we will learn to realise there is more to life and humanity.

As Mahatma Gandhi once said: “You must not lose faith in humanity. Humanity is an ocean; if a few drops of the ocean are dirty, the ocean does not become dirty.”