FOOTBALL: ‘I deserve it’

January 19, 2016
As published in Mailsport today 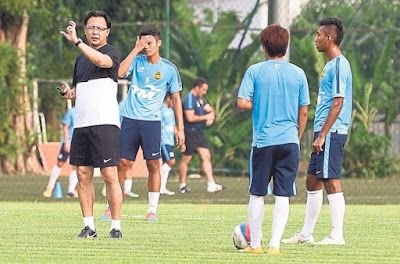 KUALA LUMPUR — It has been a long agonising wait for Datuk Ong Kim Swee but his dream finally came true after he was named national football coach by FA of Malaysia (FAM) yesterday.
The first person he called to share the good news was his 66-year-old mother, Lee Wee Neo.
“She was happy, really happy for me but she quickly reminded me it is not going to be easy and people will have plenty of expectations,” said Kim Swee.
“My family has been my pillar of strength. When things are good, everyone will want to be associated with you but when things don’t go well, the only people you can count on are family.”
The former international, who turned 45 on Dec 11, said it has been a worthwhile wait.
He was kept in limbo for months after FAM remained mum as his contract as the Harimau Muda coach expired last year.
“Yes, I deserve this job. I know some people had called me mad (when he was made interim coach last year) and some may now call me crazy for accepting the position. It has been my dream to coach the national team and I thank FAM for their faith in me,” he said.
Kim Swee thought he would be out of a job after failing to qualify from the SEA Games group stage.
But he was then appointed interim national coach (replacing Dollah Salleh who quit).
It will not be a walk in the park as Kim Swee's two-year contract comes with three targets — win this year’s AFF Cup, qualify for the 2019 Asian Cup and improve the national team ranking from 171 to 140.
He said the first two targets were realistic but moving up 30 spots would be a challenge.
“It’s not something that can be done within a year or two … perhaps three. But this is part of the requirement. Let’s see how it goes.”
Kim Swee will pick up from where he left after managing Harimau Malaya in the World Cup/Asia Cup qualifiers.
Dollah left with a bruised ego after the national outfit failed miserably, losing 6-0 to war-torn Palestine on June 16 before being hammered 10-0 by the United Arab Emirates on Sept 3.
Kim Swee believes he had earned the respect of senior footballers.
“When I was interim coach, I could see the players’ commitment, including the seniors. They respected my position and we worked well. We can’t rely on Safee Sali and Amri Yahyah all the time. It’s time for the youngsters to play a bigger role.
“It’s not going to be easy pleasing the fans. They’ll get tired if I said ‘we gave a good fight’ after losing a match. It’s all about results. That’s the only thing that matters.”
With his new role, will he change his Twitter handle (@OKS_HarimauMuda)?
“Maybe … but I’ll stick with it for now,” he said.
coach FA of Malaysia football harimau malaya Ong Kim Swee