FOR months they kept him in limbo. Datuk Ong Kim Swee was unsure of his future as his contract with Football Association of Malaysia (FAM) was due to end last month.

Right after a forgettable outing at last year's Singapore SEA Games, many would have thought it would be the end of the road for the Malacca-born former international.

The Harimau Muda coach, however, remained bullish he was still the best man to coach the senior team.
On Monday, the national body named Ong as the new national football coach. He was handed a two-year contract.

It was a dream come true for the 45-year-old who had, on many occasions, declared publicly his desire to occupy the hot seat.

He replaced Dollah Salleh who quit after Harimau Malaya's humiliating 10-0 defeat against the United Arab Emirates (UAE) — the worst loss ever recorded by the national team.

Last year was a dark period for Malaysian football for the nation was placed 171 in the Fifa ranking — its worst position ever.

While Ong may believe he is the right candidate to change the nation's fortunes in the international scene, many beg to differ. 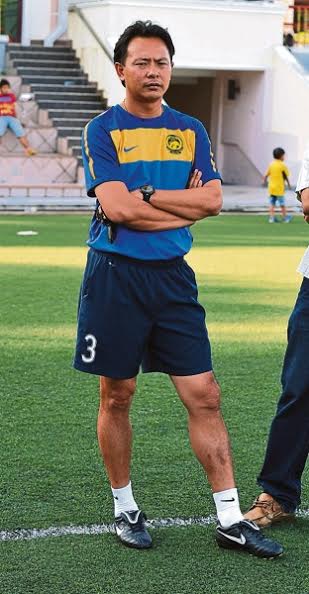 They said except for the Under-23 squad retaining the SEA Games gold medal in Jakarta in 2011 and winning the Merdeka Tournament two years later, Ong has had little impact.

Harimau Muda were fourth in the Myanmar SEA Games in 2013 and failed to qualify for the semifinals last year.

Yet, FAM seem to have plenty of faith in him. He was named interim coach after Dollah left.

During his second stint as interim coach (the first was after Datuk K. Rajagobal left in 2014), the team were thrashed 6-0 by Palestine and suffered a 2-1 defeat to UAE in the remaining World Cup/Asian Cup qualifiers of the year.

The team edged Timor Leste 1-0 and were trailing Saudi Arabia 2-1 before the match was abandoned in the 88th minute after fans launched flares and smoke bombs onto the pitch at the Shah Alam Stadium.

Perhaps the powers-that-be at FAM were happy to see Ong lead the team to “respectable” defeats, if such a term even exists.

FAM placed advertisements for the post in major dailies. The end result: three familiar candidates who have been eyeing the top post — Bojan Hodak, Robert Alberts and Ong.

A similar show transpired before Dollah was named national coach.

It was clear the only reason FAM advertised the post was to show how ‘transparent’ the national body was in scouting for the right man.

All the talk of hiring a foreigner (not those who have plied their trade with the local teams for years), remained as ... talk. Ong may seem to a cheaper choice for FAM.

One wonders if FAM had put any thought before setting Ong’s key performance index.

He is to win this year’s Asean Football Federation Cup, to qualify for the 2019 Asian Cup and to improve our Fifa ranking from 171 to 140.
Ong would not say this out loud but to impose such requirements over a team that has been handed a series of beatings throughout last year is ridiculous.

The top job comes with plenty of pressure but the attention should not be just on Ong alone. He is no miracle worker. He needs the right set of players to assist him achieve the desired results. Football is a team sport, not a Sdn Bhd.

Compared to his predecessors, Ong is savvy when dealing with the press and fans. His Twitter account (@OKS_HarimauMuda) has more than 55,000 followers. Ong, who has a knack for cooking, is well aware he could be fried by loyal supporters and observers if the national team continued to serve pathetic performances.

True, he has only two years to prove himself but he has worked with the Under-23 players who have since featured with the national team.

They include the likes of Wan Zack Haikal Wan Nor, Gary Steven Robbat, Junior Eldstal and Fadhli Shas.

He also claims to enjoy a good working relationship with the senior footballers. Establishing such ties are important as some former coaches failed to win the respect of the old guards due to clash of ego.

Ong has been reminded by his beloved mother, Lee Wee Neo, to expect the mounting pressure. He is well aware life will no longer be the same for him and his family for they will be under public scrutiny. Call it a perk or curse of being the national coach but it is a significant position that is able to win or break the hearts of millions of Malaysians.

FAM cannot ignore the 10-0 annihilation and our 171 ranking. Ong cannot be made the scapegoat if we fail, yet again. The same KPI must be slapped on those occupying the comfortable seats in Wisma FAM.

They, too, should be given the boot if they fail in improving the standards of Malaysian football.

Millions have been spent on football, its infrastructure and facilities, yet we have nothing but five SEA Games gold medals to boast about since 1977. It is sad.

Will Ong silence his critics? That remains to be seen. One thing for sure, he and FAM will need more than “ong” (luck in Chinese) to do the trick.

HARESH is executive editor of Malay Mail. He can be reached at haresh@mmail.com.my or on Twitter @HareshDeol
Datuk Mokhtar Ahmad FA of Malaysia football Malaysia Ong Kim Swee