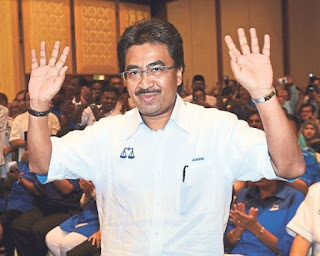 KUALA LUMPUR — The government remains unperturbed by negative comments from certain quarters over the country’s economy and is taking steps to improve its coffers, says Deputy Finance minister Datuk Johari Abdul Ghani.
Johari downplayed an article by DMS Funds chief executive officer Peter Kohli, which said Malaysia “never really lived up to expectations” and “allegations of rife corruption in the government” were among reasons why investors should steer clear from the country.
The article was published on Nasdaq’s website on Friday.
“We’ve heard such stuff from George Soros and other fund managers in the past. We are facing a lot of external factors (contributing to the poor economy), just like many other countries,” Johari said.
“The comment is no different from what we’ve have heard before. It’s a choice of where you put your money.”
The Titiwangsa MP said Budget 2016 was presented last October with the assumption of the oil price being US$48 (RM212.40) per barrel. Instead, the benchmark Brent crude oil price hovered near 12-year lows and traded at US$30.54 (RM135) on Friday.
“The price has dropped almost US$18 (RM79.60) per barrel since. It’s been two months since the Budget was announced and based on calculations, we have lost RM5.4 billion in revenue,” Johari said.
“We are worse off right now simply because we are net exporters of oil and if oil prices continue to drop. The government has lost more than RM30 billion in less than two years since 2014 when crude oil price dropped from US$100 to US$30.”
He said Malaysia traded a lot with China, whose economy was also in a tight spot.
“Even other countries that enjoy good business relations with China are  affected,” he said.
“I will not deny there are issues ... negative perceptions of these issues but the government is resolving them,” he said, without elaborating on the domestic woes faced by the government.
“We will ensure rakyat will not be affected and we will be prudent with our spending. We will stick to our game plan. Negative comments like those made by Kohli will not derail our plans to lure investors,” Johari said.
He said Prime Minister Datuk Seri Najib Razak was scheduled to meet senior ministers to discuss the recalibration of the Budget before it was presented on Jan 28.
“The prime minister has given his assurance it (recalibration) will not affect the people’s well-being,” he said.
As for investors, Johari said those who knew Malaysia well enough would appreciate its potential.
“We have those looking at hot money (short term) ... we can’t stop them from moving. But there are those seeking long-term investment and we will make sure their needs are taken care of,” he said.
“We will provide them better access, facilities, infrastructure and political stability.”
Bernama reported the ringgit is expected to trade sideways against the US dollar this week on concerns over plummeting oil prices amid fragile global sentiment.
Bank Negara Malaysia is expected to have its first Monetary Policy Committee meeting on Thursday. In the last meeting held on Sept 11 last year, the central bank decided to maintain the Overnight Policy Rate (OPR) at 3.25 per cent.
DMS Funds finance ministry investors Johari Abdul Ghani Peter Kohli