Let Lee go all the Wei

February 06, 2018
UPDATE 1.15am: Malaysian Athletics Federation (MAF) president Karim Ibrahim, after reading this article, had in a WhatsApp message at 1.13am, said: "MAF will include Lee in the Gold Coast 2018 Commonwealth Games."

That reply itself is a record - exactly five minutes after this posting was published! 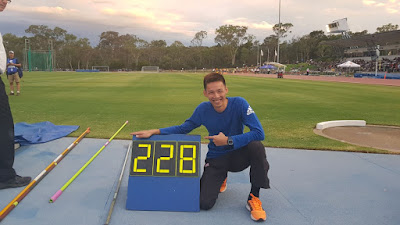 National high jumper Lee Hup Wei (pic) claimed his second gold medal in the New South Wales Open Athletics Championships in Sydney on Feb 4.
The 30-year-old and his teammate Nauraj Singh Randhawa both cleared 2.24m but Hup Wei was awarded the gold on count back.
Hup Wei's effort was 4cm short of his personal best of 2.28m, his gold-medal winning mark at the ACT Championships in Canberra last month.
Read the full article here.
Immediately after Hup Wei achieved his personal best of 2.28m, I received this message from a sports official.
"Maybe you can write about his (Hup Wei's) recent result

(The) athletics federation & OCM didn't include his name in the Commonwealth Games and (he) was not given any support or assistance to fly to Canberra, Australia to compete.

He found his own way there, competed and set new heights & hopefully (he will be) back in the list of athletes for the Commonwealth Games.

My question to (the) federation, OCM and other sports parties - why do we like to sideline athletes when they need the support most?

It is irrational and irresponsible for anyone to say athletes above (a) certain age should retire when they still have the passion, especially when they continue to perform well.

Sports is all about performance, not a matter of liking or siding (someone).

The young ones should be given the opportunity but not blindly for the sake of exposing (them). There should set some standards set to compete at the highest level.

Those who set records feel bad knowing their records stand for so long, evident that these athletics events are not growing and athletes nurtured are unable to peak to better forms."

Hup Wei, a man of a few words when it comes to the press, pointed out his 2.28m record was "an achievement similar to that of the silver medalist at the last Commonwealth Games."

In 2014, Kyriakos Ioannou from Cyprus leaped 2.28m to win silver. Canadian Derek Drouin set 2.31m to win the gold at the Glasgow Games.

"I hope to join the (Commonwealth) Games," Hup Wei said.

When asked if anyone from the Malaysian Athletics Federation had spoken to him about his possible participation in the Games, Hup Wei replied "not yet".

By the way, remember Ruth Beitia?

The Spainiard won gold at the 2016 Rio Olympics in the high jump at the age of 37.
Beitia, who made her international debut in 1996, became the oldest Olympic champion in a jumping event as she cleared 1.97m on her first attempt.
turning 36 soon, I feel old writing this. I can't imagine how the decision makers who are least 20 years my senior must feel. But we can't judge a person based on his or her age, no?
At the end of the day age is just a number and it's all about getting the job done, right?
athletics high jump Lee Hup Wei Malaysian Athletics Federation ocm