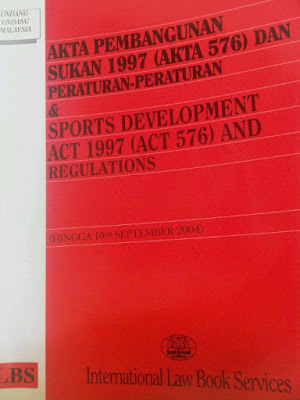 The Attorney-General's Chambers has declared a NFA (No Further Action) on the investigation papers (IP) into the failure of Klang City International Marathon organiser to obtain a licence or apply for one from the Sports Commissioner to hold the event last December.

The NST quoted Klang Selatan district police chief Assistant Commissioner Shamsul Amar Ramli as saying: "The order was done on the directive of the Attorney-General with the reason that Section 36(1) of the Sports Development Act 1997 is not an offence that can be accusable and it was subsequently classified NFA,"

The AGC may have come to that conclusion because Section 36 does not specify that not having the appropriate license is an offence.

"Section 39 of the Sports Development Act 1997 clearly allocates a penal action for an offence committed under Section 36(1) of the same Act.

Youth and Sports Minister Khairy Jamaluddin was quoted by NST on Dec 11, 2017 as saying: “Failure to get a licence from the Sports Commissioner’s Office is a breach of Section 36 of the Sports Development Act 1997.

“It is only right for the organiser to be investigated by the police and charged in court for breaking the law."
Read the full report here.
There are specific provisions in the Act that provide for penalty (eg Section 30 and Section 38) but if no penalty is expressly provided, then Section 39 should rightfully come into play.

Now let's look at what the Sports Development Act 1997 is all about.

Injuries can happen during sporting events. Thus the issue of responsibility comes into play.

And this is where the Sports Development Act should rightfully play its role to ensure those wanting to organise events are regulated and licensed.

For the record, the Youth and Sports Ministry spoke about plans to amend the Sports Development Act in 2015 and said the same thing again in 2017.

Would this now mean:

1. Organisers no longer need to seek approval from the Sports Commissioner's Office?
2. The role of the Sports Commissioner is now redundant? And as such, would tax payers' money be better spent elsewhere instead of paying the wages of the staff and maintaining the office?
3. National federations/associations will no longer have any say in the running of sporting events in the country?
4. The Sports Development Act 1997 is a toothless legislation?