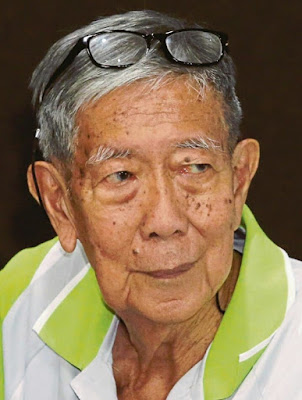 Datuk Sieh Kok Chi, the former Olympic Council of Malaysia (OCM) secretary, has written the second part of his mid-term review of the Podium Programme.

For the uninitiated, Kok Chi - a former engineer with the Irrigation and Drainage Department of Malaysia and represented the country in water polo - has served Malaysian sports for decades, mainly through OCM.

Here are his views, as emailed to Foul! minutes ago:

After publishing my review of the Podium Programme, I received many views, comments and requests for clarifications, which I feel I should respond. The main questions asked were as follows:

With regards to the first question, Haresh Deol has asked the following (as per the article 'How much was really spent on the podium programme?'):

I hope the upcoming workshop will clarify this important matter.

Organising the workshop is a good idea, if the objective is to inform the general public, the true and correct situation, so as to enhance public support and confidence on the Podium Programme. Much of the criticism on the programme is due to the lack of information and facts being released by NSI to the concerned public, who many have lost faith in the programme.

To hand-pick participants and have NSI and NSC staff forming a large proportion of the participants will only give the impression that the workshop is a ‘show’ to pull wool over the public’s eyes.

The splitting of NSC into two separate departments, NSC and NSI, by the then Youth and Sports Ministry, Datuk Seri Azalina Othman Said, was a wrong move, and it increased the government’s expenditure without much additional benefits.

In the light of government’s decision to reduce expenditure, it is timely to turn NSC and NSI back into one again.

How much say and contributions do NSAs have over the programmes of their athletes selected into the Podium Programme?  From what I heard unofficially, it is very little (contributions and say by NSAs).

Is this a good thing? Yes and no because it reduces the NSAs to no-bodies. There have been allegations that some NSAs used the Podium Programme to hide facts from their members.

Since the Podium Programme is being funded by public funds, why are the facts and figures of the programme not made known to the public as it has great public interests and concerns?

I hope the participants of the workshop should decide whether the Podium Programme should be more transparent or more wrapped up under ‘OSA”. This is important, because there must always be a check and balance.

Editor's note: The series of articles published in Foul! are to seek clarification over questions that must and should have been raised by the stakeholders.

Other programmes that have been initiated recently will also be highlighted in days to come, for the betterment of Malaysian sports.
Malaysia National Sports Council National Sports Institute Podium Programme Sieh Kok Chi Sports