Surprisingly missing from the launch at Wisma KBS in Putrajaya this morning are the other major stakeholders in sports - one of them being the Olympic Council of Malaysia (OCM).

In the spirit of the much touted 'Keluarga Malaysia' concept, one would expect a key official (or two) from OCM to join Prime Minister Datuk Seri Ismail Sabri Yaakob during the launch event.

After all, didn't OCM say it wanted to play a bigger role in the Malaysian sports industry? Oh well.

Today is also a day to remember for national diver Pandelela Rinong.

The Sarawakian is among the 17 recipients of the Panglima Setia Bintang Sarawak (PSBS) which carries the title ‘Datuk’ in conjunction with the 85th birthday of the Yang Dipertua Negeri, Tun Abdul Taib Mahmud today.

Last but not least, Kuala Lumpur-news website Twentytwo13 is the first media organisation from Southeast Asia to team up with Sport Integrity Global Alliance (SIGA) to usher sports into a new era of integrity. 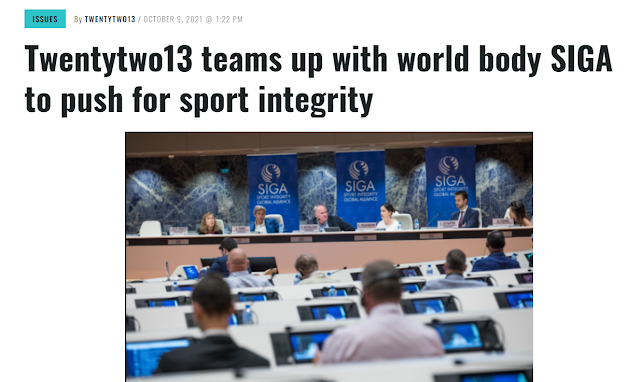 The first person who called to congratulate us for the recognition is Foreign Minister Datuk Saifuddin Abdullah.

For the uninitiated, SIGA is the world´s largest coalition in the field of sports governance and integrity.

What does this mean to Twentytwo13? Global recognition.