Findings of probe on Ziyad losing Paralympics gold medal only the beginning, heads must roll 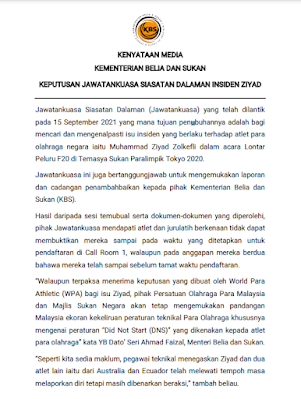 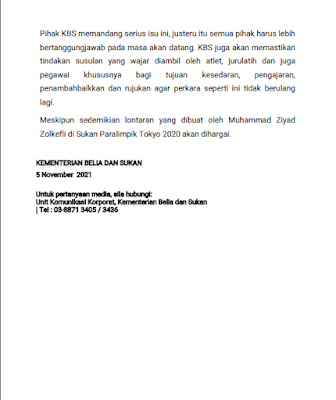 It has to be the much anticipated press statement of the year.

And one would expect that such a statement be given to members of the Press via official means.

Instead, only a handful of journos were given the statement issued by the Youth and Sports Ministry today regarding the findings of the investigation committee that looked into the events that led to Paralympian Muhammad Ziyad Zolkefli losing his gold medal at the Tokyo Paralympics on Aug 31, 2021.

It seems like certain quarters are eager to downplay the episode - yes an episode that saw a massive outcry with some resorting to cyberbullying tactics in the name of bringing honour to the nation. Bah!

The findings of the probe on the issue is only the beginning. As I tweeted earlier:

Re Ziyad losing gold medal at Tokyo @Paralympics
- Report by @KBSMalaysia investigating committee must be made public.
- Will officials, keyboard warriors now make public apology after massive outcry during incident?
- This matter isn't over. Heads must roll. We lost a GOLD medal https://t.co/jAzcWelYzL

Yes, heads must roll. Because so much of effort was put into Ziyad creating the record-breaking feat and it was given away due to not being at the call room on time.

Due to that, Malaysia lost a gold medal. This is a big deal that needs to be dealt with.