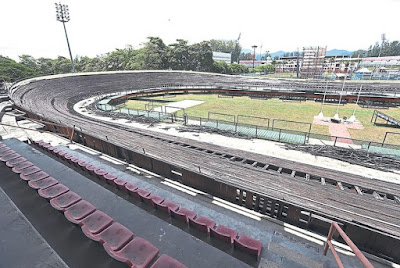 AS the wooden tracks at the Velodrome Rakyat in Ipoh lie rotten like the ruins of an ancient village house, the only things that seem to cycle around are the blame game and excuses.

For the last two years, the velodrome, built 26 years ago, has been left at the mercy of the elements without adequate maintenance. It was declared unusable in 2013.

Could its present state been avoided? Yes, it’s just that no single authority assumed responsibility for its upkeep.

And while fingers are being pointed at each other, Malaysia’s first velodrome — built on public donations — continues to rot away.

On Monday Sports Minister Khairy Jamaluddin blasted the state government, Malaysian National Cycling Federation and the Perak Cycling Association (PCA) for neglecting the velodrome.
These bodies, including Ipoh City Council (MBI) and state Public Works Department (PWD) have absolved themselves of the responsibility of maintaining the complex.

PCA, who played a large part in the velodrome’s construction, said the complex was handed over to MBI upon completion.

But MBI claimed they are only responsible for the upkeep of the building while PWD are in charge of maintaining the track.

PWD said they can only assume responsibility on the instruction of the state government. Unless the government take ownership of the velodrome, which hasn’t happened, MBI cannot take over the maintenance works.

Differing statements have been issued on the actual repair cost.

The Sports Ministry say RM7 million will be needed; PWD claim it will cost RM10 million.
PCA said they have been corresponding with the state government and even informed them of a German company’s proposal to install engineered wood that would be rot resistant for 50 years. The cost — RM4 million.

But PCA claim to have received no reply. Why?

Khairy appeared to have had enough of.

He said in a Mailsport report on Tuesday his ministry would step in and take charge if no parties were prepared to do so.

This is probably the best way forward.

But questions on the upkeep of the facility will continue to be asked; especially on why so many different authorities failed to do anything about the problem.

The most important thing now is to get the velodrome refurbished immediately. But herein lies the problem — who will carry out the repairs?

That is why the statement from Khairy is timely. Let the Sports Ministry be the singular authority to take charge of the upkeep according to international standards.

Velodrome Rakyat hosted SEA Games, and the Asian and World Cycling Championships.
It cannot be left abandoned like an unwanted child. The authorities cannot pretend to look away.
The velodrome, built with money that came from the toil and sweat of Malaysians, can never be allowed to rot again.