HARESH SAYS: Who should Serie A, La Liga fans blame? 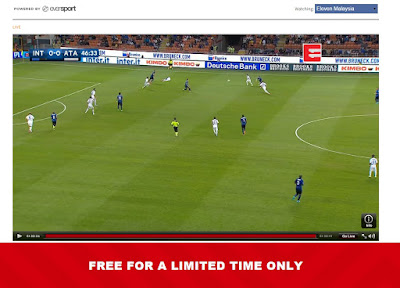 IT started with an email from a long-time Juventus fan, Jason Ong.

Ong, had in his Aug 13 email, said Serie A fans were disappointed upon learning Astro would not be airing the Italian league.

“I would like to ask if there is anything you or Malay Mail can do to help us voice our disappointment,” he said.

A Juve supporter for 20 years and committee member of Juventus Club Malaysia, Ong’s frustration is understandable. It mirrored the disappointment M-League fans suffered earlier this year as only selected matches were aired live. It remains unclear if there will be any live matches when the Malaysia Cup kicks-off next month.

Upon obtaining clarification, I had on Aug 14, tweeted: “Astro is in the midst of negotiating broadcasting rights for Serie A. Sports ain’t cheap these days.”

Yes, sports is not cheap.

It was reported on July 10 that Telefonica had bought the La Liga rights for the 2015-2016 season for 600 million euros (RM2.9 billion). Reuters had last October reported Italy’s football league awarded international television rights for Serie A games for 557 million euros (RM2.7 billion) for the next three seasons, almost 60 per cent more than the previous auction. In May, Italian regulators launched an investigation into a possible collusion between Italian broadcasters Sky Italia and Mediaset, in connection with the sale of Serie A football broadcasting rights.

The email from Ong also reminded me of how football fans were up in arms after Astro increased its subscription fee by RM6 following the escalating cost of English Premier League broadcasting rights in 2013.

I had then, together with fellow journalists Tony Mariadass and Satwant Singh Dhaliwal, met Astro’s chief operating officer Henry Tan, who told us: “There has been an increase of up to 300 per cent on the cost of bidding for international sports events. We do not decide how much we want to pay as there are several factors that push the owners of the rights to raise prices.”

Once again, Astro faces such a predicament, leaving fans dismayed over the situation.
It is not just about purchasing the rights to air the league alone but being forced to buy a “package”. This explains why Astro is still in the midst of negotiating a deal to air Serie A and La Liga. Broadcasting insiders revealed rights holders often want to create their own sports channels with their sports properties. As such, broadcasters, including Astro, would need to purchase the whole channel, including other less- known sports properties. Imagine buying a package that consists the rights of a top notch football league bundled with handball and curling.

Astro subscribers can relate to this. After all, they are required to purchase certain packages, although they may not like a certain “pack”. The way I see it, the rights holders are “doing an Astro” on Astro.
But Astro is not alone in this dilemma.

In Singapore, Fox Sports Asia, which has been holding the local rights to the Spanish league since 2012, was unsuccessful in securing a deal this time around. The channel, which is available on both StarHub and Singtel TV, will not screen any La Liga matches this season.

The New Paper reported the Asian rights to the league were secured by beIN Sports, which does not have a channel in Singapore.

Other rights holders prefer a direct relationship with their viewers by offering sports content online. I was able to catch highlights of Serie A matches, including the Udinese 1-0 win over Juventus last Sunday on Eleven Sports Network (http://elevensportsnetwork.my/watch-now/). While it is apparently “free for a limited time”, fans who want to watch it online will need to get their credit card details ready for every match and invest in a really big monitor or a smart television. But this may please their other halves, who will now be able to watch Devious Maids on the big screen at home.

Yesterday, Eleven Sports announced its multi-year deal with EverSport.tv to provide live streaming services of its content, including the English FA Cup, French Ligue 1, La Liga and Serie A, direct to consumers, with Malaysia as the first of the network’s launch territories.

Eleven Sports group managing director Danny Menken said: “The aim of our network has been to optimise the fan experience and to reach as wide an audience as possible. This deal is in keeping with both ambitions. Soon, we will be able to offer millions of our fans a wide spectrum of top content, when and where they want it, and in their local language.” The statement added that the service will be made available to viewers on a monthly or annual basis.

With the current rising cost of living and sliding ringgit, another price revision in its subscription will not go down well with viewers – something Astro would logically want to avoid.

Sports content escalates annually. It is rather frustrating for viewers when the only thing that would distract us from the daily grim is now turning into a costly affair.

In not so many words, Astro’s head of sports business segment, Lee Choong Kay, said there is still hope for fans.

“Although the new season for the Spanish and Italian leagues have kicked off, it doesn’t mean negotiations stop. Astro is still negotiating with the rights holders and may take us into the season,” Lee said.

To Ong and football lovers, all we can do is keep our fingers crossed and hope we will finally catch Serie A and La Liga matches in the comfort of our living rooms soon.