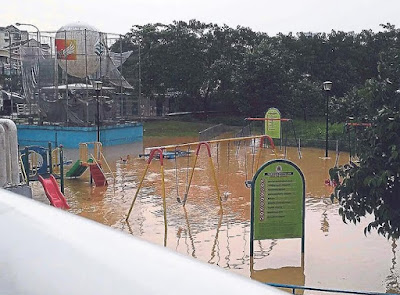 IT has been acknowledged as a flood-prone area by the authorities since the 1960s. Yet, little has changed for those living and trading in Kampung Kasipillay.

Perhaps inaction is Kuala Lumpur City Hall’s cynical way of preserving history, to compliment the Low Yat buildings that still stand strong amid the rapid development in the area. What used to be the Low Yat sawmill and other light industries have now turned into commercial banks and restaurants.

The population ratio, too, has increased with several new high-rise buildings.

Yet, flash floods continue to cause mayhem there, disrupting traffic and wrecking homes. Efforts were undertaken in the past but failed to address the situation. Water continues to enter homes despite the nearby Sungai Batu being realigned, widened and lined with concrete walls in the 1980s.

The latest flooding incident happened last Thursday. It is baffling that such episodes continue to haunt those living in this neighbourhood — located barely 3.2km from City Hall’s headquarters in Jalan Raja Laut.

I received a phone call from long-time resident and retired teacher M. Silvaratnam, 60, regarding the floods. Cikgu Silva, as most of us fondly call him, has been updating me on the flood situation there.

“It’s happening again. And worse still, the balloon did not function. We were not warned,” he said during our brief chat on Thursday evening.

The balloon he was referring to is part of a flood warning system. Inaugurated by former mayor Datuk Seri Ahmad Phesal Talib on Dec 15, 2013, the system works when a sensor installed on the riverbank detects rising water levels. A siren will sound and the balloon will rise in stages as a warning to residents. The RM120,000 project, a joint effort between City Hall and the Drainage and Irrigation Department, was said to be “the first of its kind in the world”.

But no sound was heard nor did the balloon rise last Thursday, much to the residents’ frustration.

I had, in my column ‘Give us back the balloon, Mr Mayor’ published on Jan 22, last year, highlighted the balloon was nowhere to be seen a month after it was installed. City Hall then confirmed the balloon was brought down on Jan 7 the same year as it was believed to have been punctured by firecrackers. The residents have been poking fun at it since.

Those living there just want the old siren back. They told Malay Mail on Monday the system had failed at least five times previously. Retiree Phua Thian Wah, 60, said it only took about an hour for his house to be flooded.
“I didn’t hear any alarm. Is it even working?” he asked.

City Hall project implementation and maintenance executive director Datuk Tan Keng Chok insisted the system was functioning but said he will look into complaints raised by residents and traders.

He said the river was rising faster because of increased run-off from development taking place in Bukit Tunku.
With all due respect, Tan, this is not new. In fact, this was highlighted in the Kuala Lumpur City Plan 2020 draft which was unveiled in 2008. In a section specifically on Kampung Kasipillay, a paragraph reads: “Over the years, the development of Bukit Tunku now compounds the problem of flooding by the overflowing of drainage of the culverts from Jalan Kuching back flowing in to this area. Thus, if the river does not flood the area, the Jalan Kuching culverts will flood certain parts of the area, namely Jalan Duku/Jalan Tampoi.”

The final paragraph reads: “Last year, 2007, during the huge flood alleviation, Kampung Kasipillay was part of the programme to have a pump house with a budget of RM5 million.”

What has happened to that programme?

City Hall is well aware of the flooding situation, yet they have no qualms approving the many projects near Kampung Kasipillay and in Bukit Tunku. Shouldn’t the city council address the situation before allowing new development to take place?

The folks in Kampung Kasipillay get jittery each time it rains and when it pours, they are already expecting the worst. Will City Hall be responsible if a death occurs due to the rising waters?

Such matters must be addressed immediately. Kuala Lumpur comes to a standstill each time it rains. An hour long downpour will see many areas in the city, including Kampung Kasipillay, flooded. The poor drainage system is to be blamed as rubbish, including construction waste, continue to clog our drains and choke our rivers. The spillover effects are horrible — from motorists trapped in their vehicles due to flooded roads to residents fleeing homes.

Please look into the plight of those living in Kampung Kasipillay and other flood prone areas in the city. For the time being, City Hall should just install a really loud siren that wails when water rises at Sungai Batu.

As for the big helium balloon, just place it as a decorative piece in front of City Hall’s headquarters.