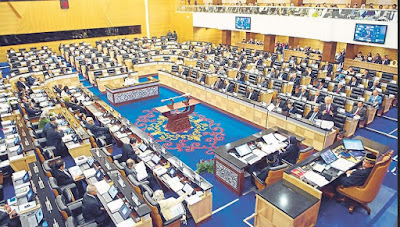 We have heard of the word “snowballing” before.

Those who have played with snow know if you let a small snowball roll down a slope, more likely than not, it gets bigger.

An unresolved problem may get bigger or a situation that is not controlled may become worse. This is called the snowball effect.

There were initially queries about 1Malaysia Development Berhad (1MDB). There were answers given in the press and even on national television by 1MDB and the authorities.

However, parties with vested interests and an “evil agenda”, to use the words of Deputy Prime Minister Datuk Seri Ahmad Zahid Hamidi, manipulate the genuine concern of some Malaysians and snowballed the simple matter into an effort to thwart the peaceful practice of democracy.

Suddenly, the nation is being attacked surreptitiously, unknown to the ordinary citizens, as events seemingly innocently unfolded.

Without blazing guns and tanks, one by one our institutions’ integrity and credibility sought to be undermined — Bank Negara Malaysia, Attorney-General’s Chambers, the police and even the office of the premiership.
The democratic tool of transparency was sought to be turned into breaches of confidentiality and hence, a dangerous breach of national security.

No government can function effectively if it is unable to guard certain information.

The breakdown of critical institutions leads to anarchy and the destruction of civilised democracy — a masterstroke by the enemies of the nation if not for the fact our security surveillance units are alert.

Imagine a democratic country where the democratically elected prime minister is toppled without due process.
Due process means process in accordance with the law of the land. We all know what the rules of the game are and there are no exceptions unless provided by the law itself.

With the events that have unfolded and as confirmed by Attorney-General Tan Sri Mohamed Apandi Ali (as reported in the press), there was a dangerous move to topple the prime minister through illegal means.
I cannot imagine the dangerous precedent that would have been set had that devious plan come to pass.
That would have been the end of political stability and democracy in our country which could cause us to slip into third world politics for the next 100 years or more.

There are many things we ordinary citizens do not understand nor can imagine in the world of politics whether domestically or internationally.

Enemies of the nation today need not move with weapons of mass destruction.
All they need is to create mass misperceptions of destruction.  Ideas, views and even jokes which we innocently pass may often be the very bullets our enemies have anticipated in their design to destroy our democracy.
Hence, we need to be careful not to become pawns on their evil chessboard.

All they need to do is to create a snowball effect where the unsuspecting citizens become a party to their design to destroy and control the country to achieve their own agenda.

There must be some way to protect our democratic way of life and our system of political leadership from being perverted by hostile parties with their own evil agenda.
Section 124B is one such provision in the Penal Code whose purpose is to protect parliamentary democracy.
The section provides that “whoever, by any means, directly or indirectly, commits an activity detrimental to parliamentary democracy shall be punished with imprisonment for a term which may extend to twenty years.”

This section should not be politically abused to quash legitimate dissent which is characteristic of democracy itself.
Any changes to the system must go through Parliament which ought to represent the voice of the people.

We cannot allow the nation to slip into a state of lawlessness and our democracy susceptible to foreign threats.
This is the first and foremost duty of all the parliamentarians and state assemblymen who have sworn so.
It is also the sacred duty of all citizens and government servants.

Home Ministry, in particular, with the other relevant authorities ought to have a firm grip on what’s going on.
They cannot, because it is unpopular refuse to take necessary actions to promote peace and stability.

They must remember the ordinary citizen expects the government to spur the economy, implement policies that would provide employment and industrial creativity, build a Malaysian nation, and curb religious and racial extremism and a host of other things that can make Malaysia a great nation.

Politicking must have its limits and the limit is reached when it jeopardises the ordinary citizen’s welfare and general well-being.

Jahaberdeen is a senior lawyer and founder of Rapera, a movement that encourages thinking and compassionate citizens. He can be reached at rapera.jay@gmail.com.