Another politician scores own goal 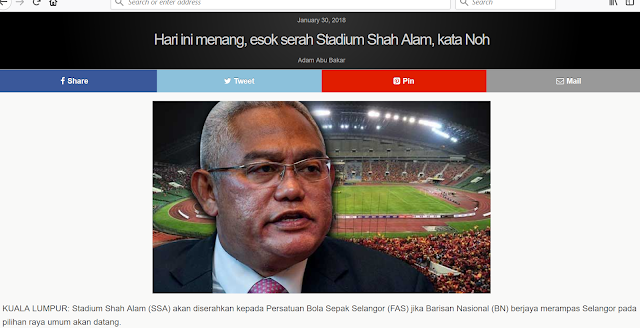 Those were the words of Selangor Umno chief Noh Omar.

And this was my immediate respond to the article on Twitter: 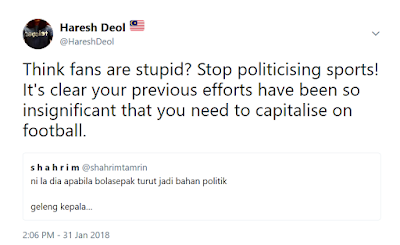 I don't know if Noh Omar will claim he was misconstrued. Such 'U-turns' occur quiet often among politicians.

But following his views, as reported by the online portal, Noh Omar joins a list of politicians who love scoring own goals.

We all know the politics revolving Selangor FA even before Noh Omar jumped on the Shah Alam Stadium bandwagon. And it's sickening.

PKR's Azmin Ali, the man who has blocked me from Twitter, is the Selangor Menteri Besar while Umno man Subahan Kamal is FA of Selangor president.

The local council, who owns Shah Alam Stadium, claims Selangor don't deserve the venue as they don't draw in such large crowds anymore. Ouch, but true what.

Also, FA of Selangor - respective whoever is the president lah - thinks it is their birth right to play at the Shah Alam Stadium and to get funding from the state government. Wrong!


"Strangely enough, the (Selangor) fans seemed to have forgotten that the venue is not the only thing that the state government has denied to the club, since the Selangor state Menteri Besar (chief minister) Dato' Seri Azmin Ali acrimoniously stepped down as club president at the end of the 2016 season.

On top of the stadium, the newly-built training complex in the Shah Alam suburb of Puncak Alam too has not been handed to the club.

By most accounts, the complex, which at one point had already been decorated with the club emblem and liveries, was built for the club as compensation by the state for taking over a valuable plot of club-owned land in the neighbourhood of Kelana Jaya. The complex was complete although the club, for some reason, did not move in immediately.

And when the bitter falling out between the state and the club took place at the end of the 2016 season, Azmin's government took down the club decorations, let other parties use it as a training ground for youth footballers and simply refused to hand over the keys.

Mid-way through the 2017 season, new club president Dato’ Sri Subahan Kamal made a fuss over the state's action and stated that they would take legal action, but nothing has been heard since that."

Why so much of animosity? Why can't people leave politics aside when it comes to sports?

Here's why: Because you get politicians politicising sports to look like they are the heroes.  Boo!

To the uninitiated - yes, the great Selangor FA, widely known as the Red Giants and has a rich history in Malaysian football, don't even have a stadium of their own. It's already 2018, mind you.

And get it out of your head that stadiums need to accommodate 100,000 fans. All football teams in this country need is just a playing venue they can call home. Bukannye 100,000 datang for the weekly matches, especially since it start at 8.45pm.

This political gimmick reminds me of Pakatan Youth's pledge to broadcast EPL matches on RTM if they win GE14. I immediately wrote 'Here's why tax payers' money should not be used for EPL ...'

And many gave the political party wing the red card.

It's amazing how these politicians fail to learn. Don't insult the fans lah.

Pakatan Youth should have shown support for the M-League, instead the EPL.

Noh Omar should actually help the fans by promising to look into ways to ensure Selangor becomes a GIANT in every sense. There should be focus, vision and an end game - regardless who the president is or the political party that will rule the state.

And Noh Omar should take cue of what Goal.com's Zulhilmi Zainal wrote: