Here's why tax payers money should not be used for EPL ...

January 07, 2018
UPDATE (Jan 8, 12.49pm): Sports are a nation builder and unifying factor. Sports should not be tainted with politically motivated agendas. To politicians of both divides, don't use sports as a gimmick to win votes.

To whom it may concern,
This is in reference to a pledge made by the youth wing of a political coalition, claiming it will broadcast all international sport matches including the English Premier League on state-owned Radio Televisyen Malaysia (RTM) should it win the upcoming general elections.
The full report "We'll show the Premier League on RTM if we win GE14, Pakatan Youth offers" can be read here.
I responded through a series of tweets as seen below: 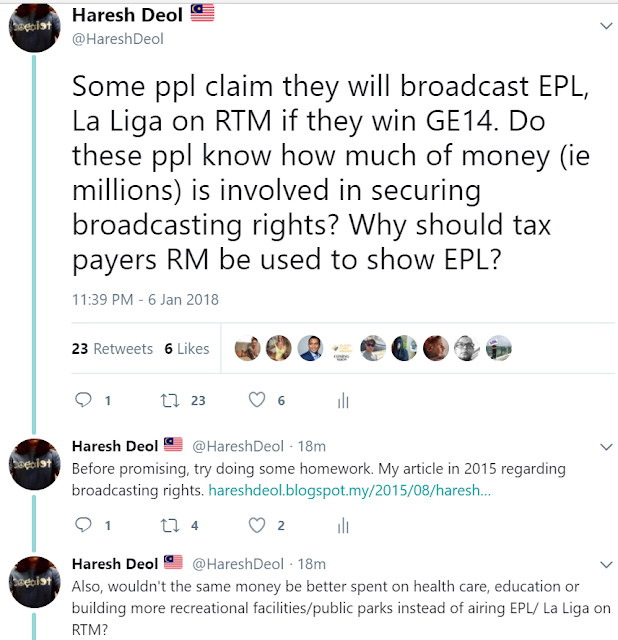 I believe my tweets are self-explanatory.
For the uninitiated (and those who clearly failed to do their homework before making the pledge), I had touched on this subject in 2015 through my column Haresh Says: Who should Serie A, La Liga fans blame?
It was the same year Telefonica bought the La Liga rights for the 2015-2016 season for 600 million euros (RM2.9 billion then) and in 2014 Italy’s football league awarded international television rights for Serie A games for 557 million euros (then RM2.7 billion) for the next three seasons, almost 60 per cent more than the previous auction.
Bear in mind:
1. Sky could be forced to pay an extra £600m annually to retain the lion’s share of Premier League matches when the next rights auction launches this year, with Amazon emerging as a potential competitor for the biggest prize in UK sport broadcasting.
Google, Apple, Facebook and Netflix are other possible rivals for Britain’s most valuable sports rights, which are split between Sky and BT under the current three-year deal. The prospect of a heated auction involving deep-pocketed tech firms has led analysts to estimate that Sky might have to pay a premium of up to 45% on the near £4.2bn it paid last time. That means a further £1.8bn, or £600m annually, to keep Silicon Valley off the ball. Read the full report here.
For the record, £1 = RM5.42.
2. Even if the political coalition has got billions (or trillions) to splurge, Astro holds the broadcasting rights in Malaysia from the 2016/17 to 2018/19 seasons. Refer to the Premier League international rights list here.
3. Another political party, PAS, had prior GE13 promised to build a new stadium in Kelantan if they won the state. No stadium was built. As GE14 looms the state-government now claims a company "sedang membuat kajian" into the RM3 billion project, as reported here.
More importantly:
The right pledge should have been broadcasting the M-League and local sporting matches. We should be promoting local sports and our very own athletes, not EPL or La Liga!
p/s: Don't use sports as a gimmick to win votes. Clearly you guys don't know anything about sports.
Yours truly,
Haresh Deol
- Two time Sportswriters Association of Malaysia (SAM) Journalist of the Year (2011, 2015).
- 2011 SAM Best Special Report award winner.
- Two time SAM Best Report award winner (2012, 2015).
- 2014 SAM Best Commentary award winner.
- Two time Malaysian Press Institute (MPI) award winner (2013 - Best News Report; 2015 - Best Columnist).
- Only Malaysian to be the judge for UK's Guardian world's top 100 footballers 2016.
Astro broadcasting rights EPL football Pakatan Harapan pas politics