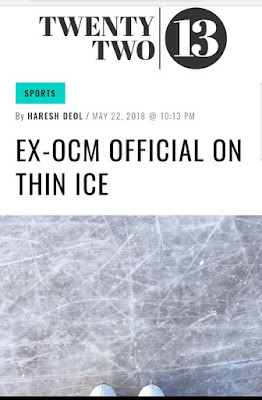 The Olympic Council of Malaysia (OCM) had yesterday started their investigation into the selection of an ice skater for the KL SEA Games last year.

It is understood the Council's disciplinary board met "four witnesses" including those from the Ice Skating Association of Malaysia (ISAM).

The board is investigating claims that the skater in question, who was part of the 3,000m short track speed skating relay team that won gold, was not being selected by the council for the regional Games.


The relay team won the gold medal as Malaysia emerged overall champions in the short track speed staking competition with four gold and three bronze medals.
"Two former OCM officials, one allegedly linked to the matter, will be called in soon," said a source.
Twentytwo13 had on May 22 reported that an ex-OCM official would be investigated.

It was then reported that a complaint was lodged and the matter was referred to the disciplinary board but the matter was put on hold following OCM's elections on May 5.