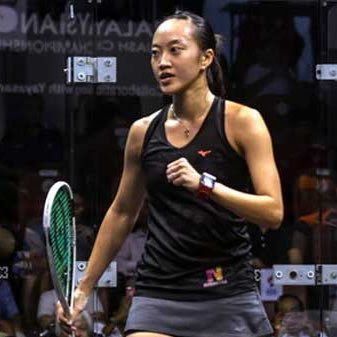 The National Sports Council (NSC) issued a clarification yesterday regarding several matters raised by national squash player Low Wee Wern (pic).
Low was dropped from NSC's training programme due to budget cuts. For the record, the NSC is the funding arm of the Youth and Sports Ministry.
The Penangite made it clear that the procedure (in axing athletes) should have been done better.

In case it is not clear, I am not talking about money or budget cuts. All I am saying is that the procedure of how it was done should have been better https://t.co/LoEhYluk5b

Below is the January 11 statement by NSC:
National Sports Council (NSC) would like to clarify on few points raised by our national squash player, Low Wee Wern, with regards to the issue of no new training contract offered to her for the 2022 season.
Wee Wern’s contract as an athlete under the Podium Program ended on Dec 31, 2021, as with all the other athletes that were under the same training program.
Without the allocation in the 2022 Budget by the Finance Ministry, NSC do not have the financial ability to continue with the same training program, with the same benefits, allowances etc.
It forced NSC to re-evaluate and made necessary adjustment to ensure the best athletes would be retain to tackle the immediate challenges posed by three major sporting events in 2022 – SEA Games in May,
Commonwealth Games in July and Asian Games in September 2022.
NSC, together with National Sports Institute and Squash Racket Association of Malaysia (SRAM), held consultation session with Wee Wern on Sept 9, 2021 – to advise her to undergo surgery at KPJ Damansara Hospital on injury to her right knee.
Wee Wern had different opinion and prefer to undergo the surgery with her own choice of specialist and has appealed to NSC to cover her costs to undergo the same operation in United Kingdom.
NSC agreed to subsidised the costs of RM70,000.00 for that surgery.
During the same session, Wee Wern was also informed that she will require a period between three to six months to have a complete recovery and its best for her to focus on the recovery efforts before
making a comeback to competitive scene.
Wee Wern understood the point and underwent the surgery in UK on Sept 28, 2021.
Consequently, NSC held engagement session with squash athletes on Dec 12, 2021 to highlight on the expiry of the training contract by Dec 31, 2021 and offer for new contract for 2022 will only be decided during the joint-committee meeting on Dec 17, 2021.
The joint-committee meeting, which was attended by NSC, ISN and SRAM representatives – together with official from Olympic Council of Malaysia - collectively decided to not offer an extension to Wee Wern for 2022 due to the fact that she will require more time to be back to her best possible shape and would not be ready for the three Games.
The committee agreed to offer contract for 2022 to six men and six women players who would form the teams for the Commonwealth and Asian Games.
NSC, however, agreed to SRAM's request to cover the costs to send Wee Wern to several international competitions to regain her competitive edge once she fully recovers.
The decisions of the joint-committee were conveyed in an engagement session which was held on Dec 18, 2021, of which Wee Wern failed to attend virtually without giving any reasons.
SRAM, too, have had (a) session with Wee Wern to share details of the committee’s decision after that.
NSC would like to apologise if there are unpleasant feelings that emerged from this episode. NSC always has the best interests of athletes at heart with all planning and efforts are galvanised towards achieving the objective for athletes to excel at the highest possible level.
All previous communications with Wee Wern were conducted through SRAM even though Wee Wern were contracted to NSC due to the fact that NSC always respect the role of SRAM and its ownership of the athletes.
NSC, however, are always willing to discuss future plans with Wee Wern and our doors are always open for her.