There have been plenty of conversations about our national shuttlers going independent.

There are those who don't see it as a problem. There are others who seem disturbed by it.

But many of them seem to ignore the visions, missions and objectives of the BA of Malaysia (BAM).

The image above, a screenshot from BAM's website, shows the objectives. Note: It does not read "owning players".

The image below shows BAM's vision and mission. The mission states to have a big pool of world class players, bigger pool of back-up players and to implement development programmes. Once again, it does not say "to own players".

As such, it comes to no surprise to why BAM has accommodated independent players as the leadership is simply keeping true to the national body's visions, missions and objectives.

This is also reflected in the July 14, 2021 press statement below: 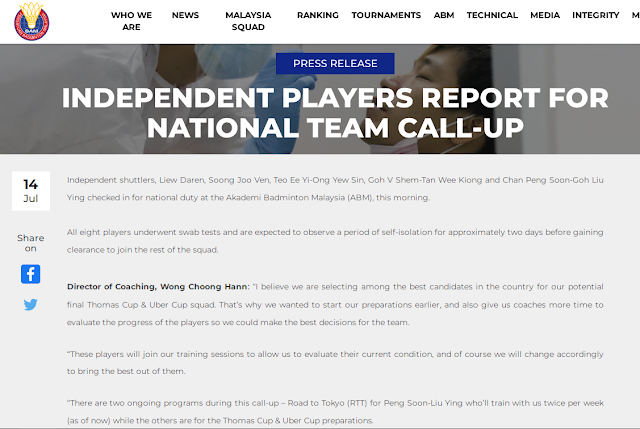 And the statement by its president pubslihed in The Star on July 24, 2021:

BAM president Tan Sri Norza Zakaria has hailed the players for displaying strong attitude and spirited efforts in spite of difficulties faced during the Covid-19 pandemic.

“We didn’t differentiate between the players, whether they were professional or BAM players, they were all one Malaysian team,” said Norza.

So if a player has served BAM or plans to leave BAM, does it matter if they go? Can they be penalised?

After all, if your employee decides to find a job elsewhere, after collecting bonus and enjoying other perks, you can't stop him or her, legally, from doing so.

And why on earth would the national body deny a deserving shuttler from representing the nation. It's based on merit at the end of the day - if he or she is good enough, then he or she should don the national colours. Period.

There are those who claim that the national body has invested a lot in the player and as such they must "pay back". These people demand that those who turn their backs on BAM should be penalised and suspended.

Well, will you demand for your child to pay back if he or she decides to do something else with his or her life instead of what you had intended for him or her? Would you disown that same child?

Like in business (and life), there are always risks involved. Some players make it. Some don't. Not all of these independent players make it once they leave the national stable. Que sera sera.

If they eventually make it as an independent player, then BAM should give itself a pat on the back for helping to develop the said player but be happy that the same resources that would have been allocated to the player is now helping another shuttler shine.

To those intending to make a mountain out of a molehill over the whole BAM v independent bragging rights saga  - just refer to BAM's visions, missions and objectives.