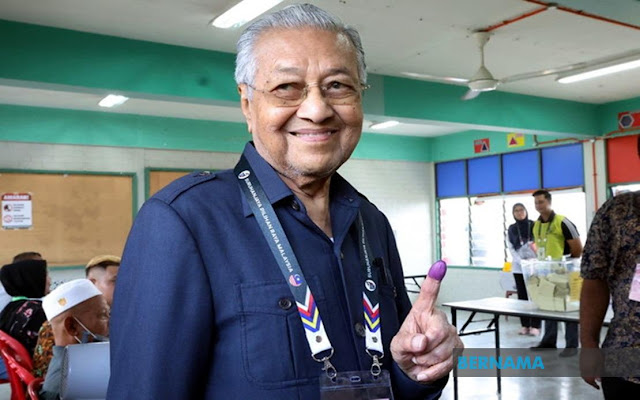 "He may have lost Langkawi, but he has pretty much killed Umno and BN."

My phone has been buzzing throughout the day with many sharing their views. But most of them start the conversation with a common question - so will be PM10?

The 15th General Election in Malaysia on Nov 19 resulted in a hung parliament. It is an unprecedented moment in the nation's history.

The battle to be the next prime minister is between Pakatan Harapan's Datuk Seri Anwar Ibrahim and Perikatan Nasional's Tan Sri Muhyiddin Yassin.

Anwar is eager to fulfill his ambition of being PM. This is pretty much his last kopek.

Muhyiddin is adamant of reclaiming the top spot in Putrajaya following his brief (17 months) stint in office (between 2020 and 2021).

But there were those who insisted that PH, having the most number of parliament seats (winning 82 out of the 220 contested), should be the government of the day. Perikatan Nasional trails close behind with 73 seats.

However, the 82 seats won by PH is still short of the simple majority of 111.

"That's why I said Atok has is the real champion. Because PN is the new BN and will work with GPS to form the new government. Asal bukan Anwar, bro. The Malays can't accept Anwar as PM," I was told.

There are also Malays who are finding it difficult accepting the possibility of Pas playing a dominant role in Putrajaya.

"Aiyoh, Blackpink concert next year. How lah?" was another question I got when discussing the possibility that Perikatan could lead the new government.

This is clearly in reference to Pas' youth recent call to cancel international concerts in Malaysia.

Some also took issue with Anwar and Muhyiddin's press conference early this morning.

"Both claim got numbers but didn't specify who is on their side. Again we are hearing the 'I have the numbers' talk."

Things don't look good in Umno as key leaders seem undecided if the party should strike a partnership with Pakatan Harapan or Perikatan Nasional.

MCA secretary-general Datuk Chong Sin Woon, in a statement, said MCA had lost confidence in Ahmad Zahid and urged him to give way to someone new to lead BN. MIC Wanita chief Mohana Muniandy also said the same.

Ironically, both Chong and Mohana lost in GE15. MIC's president Tan Sri SA Vigneswaran was also defeated in the general election. It remains to be seen if they will walk the talk and quit as well.

Here's what one person said about MCA's statement: "Irrelevant. If Ahmad Zahid sticks around, he might as well go and work with Pakatan (Harapan) and DAP."

Then there was also this remark by a senior politician: "The Chinese are wasting their bullets on Pakatan and weakening their representation in the government by killing off MCA."