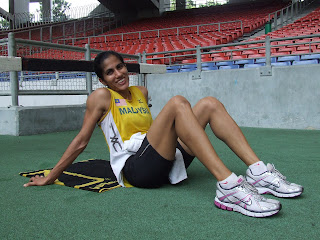 It's always fun talking to her. She carries herself well and it's easy to get interesting quotes from her. It somehow shows she's a well read individual.

Nevertheless, the 400m hurdlers athlete has been slammed on many occasions. From being labelled 'unpatriotic' by certain quarters for not representing the country for the SEA Games to now being called the 'golden child' of the National Sports Council.

Perhaps the critics are baffled to why money must be spent on an aging runner (Noraseela turns 31 on Sept 27) who is struggling to produce results.

Here are the facts.

Based on the Malaysian Amatuer Athletics Union website, Noraseela still holds the national record at 56.02s set in Regendburg on 17/06/2006. Are there any younger up and coming hurdlers who are promising enough to break that record?

Age should not be a factor. Rachael Grinham, 33, is ranked No. 4 in the world squash rankings. Tine Rasmussen is of the same age with Noraseela but that is not stopping the Danish shuttler from playing actively.

And if the government has allocated a sum for an athlete why not? Wouldn't the money be better spent on a sportsman / sportswoman than underserving officials?