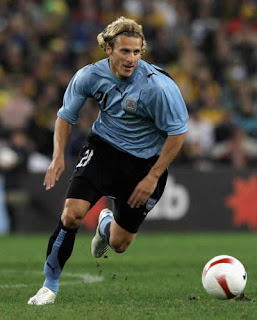 Among the points highlighted in the article include:

1. “Of the four semi-finalists, only Uruguay played in a formation that resembled 4-4-2, although the position occupied by Diego Forlan (pic) merits further examination. Although he was in principle a striker, he mostly played in an advanced midfield position, behind the team’s main striker, Luis Suarez. In effect, Forlan had a free role and was always looking to keep play moving before driving forward.”

2. “In 46 of the 64 games, the team that opened the scoring also went on to win the match. As there were also six goalless draws and another eight matches in which the team that conceded first came back to equalise, this meant that there were only four matches in which a team came back to win after conceding the first goal. The psychological effect of a lead was undoubtedly why teams wanted to avoid falling behind at all costs, and why they generally played it safe by making sure their defence was solid.”

HD says: Thanks Steve. Hope we'll be able to meet up soon. Cheers!