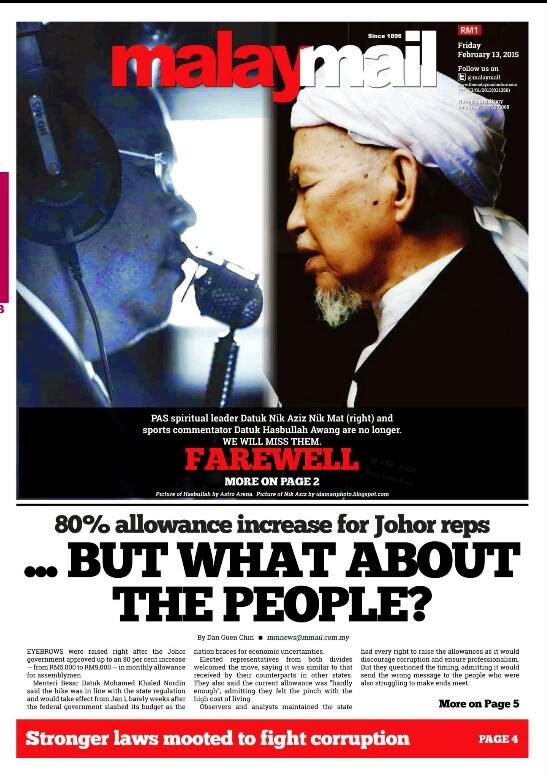 SHAH ALAM — She described him as a jovial man who placed the family first.

Noniana Hasbullah, 33, was in tears as she related how the family loved to spend time with her father Datuk Hasbullah Awang.

“We were so close. He called me adik (young girl) — even when he was angry with me. He was a perfect father figure to all of us,” she said.

Hasbullah, a renowned commentator whose golden voice was synonymous with sports for over four decades, died at the National Heart Institute (IJN) yesterday. He was 63.

“He had been in IJN since February 3 and was scheduled to undergo a heart procedure (yesterday morning). He was fine before the surgery.

“At 12.30pm I received a call saying he was critical and at 1.12pm I was informed he was no longer with us. I do not blame anyone. It is God’s will,” Noniana said.

Athletes were shocked to learn of Hasbullah’s passing.

National footballer Amri Yahyah still remembers Hasbullah’s commentary during his early days with Selangor more than a decade ago.

“When he was young, he used to run around the padi fields in Tanjung Karang. Today he is Selangor’s hero. Those were the words of Hasbullah and I will never forget them,” said Amri, who now plays for Johor Darul Takzim.

“His voice is synonymous with football. If it was not Hasbullah commentating, then it was not football.”

Former Kuala Lumpur stars Mat Zan Mat Aris and Razip Ismail recalled when Hasbullah’s voice dominated the airwaves during their days with the city team in the 80s.

“His criticism made us stronger. There was one match where he said the winning goal was sheer luck. I was peeved with that and still am, but I never told him. But we became good friends and I will miss him,” said Razip.

Mat Zan said his family members would always remember Hasbullah’s kind words during his playing days and as a coach.

“My family members, including my parents, always told me that Hasbullah heaped praise on me while I was playing and as coach. It’s so nice to know someone acknowledging me for my work. He was a top commentator who won the hearts of many.”

Former hockey international Mirnawan Nawawi admitted it would be difficult for anyone to fill Hasbullah’s large shoes.

Mirnawan, who was at IJN yesterday to pay his final respects, said: “He was a legend. A top sports commentator known by all. I knew him during my playing days, as an official with the hockey team and as a co-worker in Astro Arena.

“He was a fine gentleman, humble and soft spoken. We have lost a great commentator and it will be difficult to find someone like him.”

All Super League and Premier League matches today and tomorrow will observe a minute’s silence as a mark of respect for Hasbullah.
hasbullah awang national heart institute Sports