HARESH SAYS: I will not boycott my Chinese wife 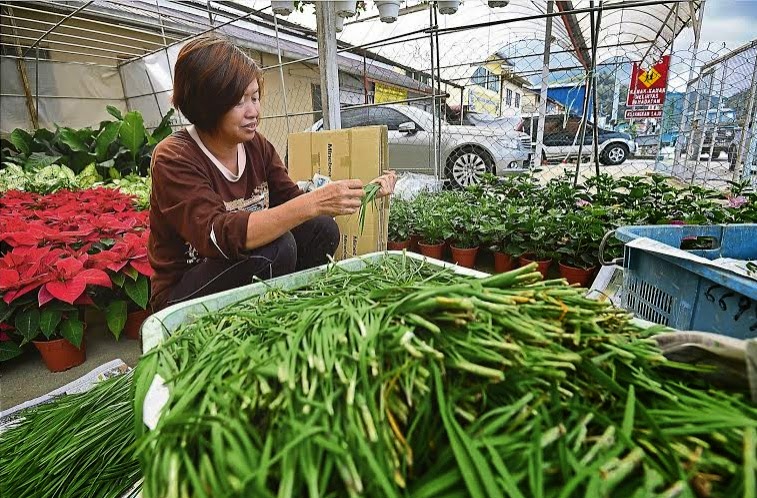 IT has to be one of the darnedest statements made by a politician.
Datuk Seri Ismail Sabri Yaakob is finally more “popular” than his singer son Gadaffi, also known as Dafi.
While the agriculture and agro-based industry minister’s Facebook page saw several sympathisers supporting his call to boycott Chinese traders, the majority lambasted his unwarranted remarks, saying it was racist.
The Cabinet minister, had on his Facebook page on Monday, said the majority of Malay consumers could push Chinese traders to lower prices by boycotting their businesses.
He later clarified by saying the post was not targeted towards the Chinese community in general but Chinese traders and businessmen who refused to bring down the prices of goods despite the drop in oil prices.
Not targeting the community but Chinese traders and businessmen? Is there a difference?
Inspector-General of Police (IGP) Tan Sri Khalid Abu Bakar was bold and quick to respond. He said police would record Ismail Sabri’s statement. Khalid, while referring to the Royal Malaysian Police twitter handle @PDRMsia, also tweeted: “Boycott issue, @PDRMsia ask all parties to immediately exercise restraint in making pub(lic) statements. It hurts our racial harmony.”
I’ve dealt with Ismail Sabri especially during his forgettable tenure as youth and sports minister. For a member of the government to suggest a racially motivated boycott reflects badly on the administration. It is 2015, and yet leaders are speaking about race, religion and skin colour.
The Bera MP must be reminded that 31.9 per cent of the 42,944 voters who turned out during the 2013 general election in his constituency were Chinese.
Former MIC strategic director Datuk Seri S. Vell Paari had in a statement yesterday said: “Why is it that everything needs to be seen through racial lenses? Why couldn’t he just label them as errant traders?”
Consumers should boycott all traders who hike prices. They include restaurants that charge more than RM1 for a glass of teh-o-kosong or when a hypermarket in Bangsar sells a litre of milk for more than RM7.
Let the consumers decide. They should choose by comparing prices and not skin colour. Boycott unscrupulous traders, boycott silly politicians.
To my lovely wife, who happens to be Chinese, rest assured I will not boycott you.

The back page headline screamed Sweet Home NSI for Ramlan.
It was published on June 12, 2013, the same day when Datuk Dr Ramlan Aziz was named National Sports Institute (NSI) chief executive officer. Just before the announcement was made by Youth and Sports Minister Khairy Jamaluddin, a representative from the ministry called me.
“How did you get the information? Who told you?” he fired his questions right after I said “hello”.
“This is a big announcement, how can you make it public even before the minister announces it?”
And he once again insisted I told him who the source was.
My reply: “The prime minister.”
He got the message that I was being sarcastic and hung up. Khairy made the announcement hours after the paper hit the stands and Ramlan was all smiles. If the Rembau MP had an issue about my article pre-empting his announcement, he would have called me first thing in the morning and said “how dare you”.
But he didn’t.
And till today I do not see the need to reveal my source. It is not about who gave me the information. In this episode, it was about Ramlan returning to helm NSI.
Sadly, many are short-sighted and this is seen in my many dealings with the authorities. They are always eager to know “who leaked the information” instead of addressing the situation.
On Monday morning, our crime chief G. Prakash received a phone call from Petaling Jaya police. An officer asked our reporter “who told you about the case?”, referring to our front page article published on the same day about a policeman who extorted money from a 19-year-old student and raped her in a toilet at a shopping mall.
Later, another police officer called. The officer was peeved that Prakash would not reveal his source.
“You should have told the gentlemen who called you that it was the IGP who gave you the information,” I said jokingly.
But the scenario is disappointing.
A young girl was raped by a man responsible to protect and serve the public. The image of the force receives a huge blow following the alleged idiotic and unacceptable actions of one policeman.
Police are striving hard to erase the negative stigma often cast upon the men in blue. As the saying goes, one rotten apple spoils the barrel.
The force is eager to shoot down presumptions of corrupt practices, bribery and links to criminal activities within. Police are eager to put on a friendly face, encouraging the public to engage and seek help from them.
This has been an ongoing effort. Home Minister Datuk Seri Ahmad Zahid Hamidi, had last September, admitted the police faced negative public perceptions despite the lower crime rate.
The police have instead engaged the New York Police Department to improve perceptions of police integrity here.
But they should start from within. The force must understand what the public wants and how the media operates.
The public only demands transparency. And that is the best way to address perception.
Two police officers were picked up following the incident involving the 19-year-old girl. Those who called Prakash could have, instead of demanding to know his source, confirmed the arrests. That would show Petaling Jaya police take a no-nonsense stand and will investigate every claim made without fear or favour.
And if the force understands the media, they would know by now that some reporters do not merely rely on information shared on police WhatsApp groups.
The natural reaction would be to sulk, whine or — when the ego gets the better of them — behave all high and mighty.
But the more respectable outcome is to admit, address the issue and move forward. There is no excuse for the incident. If guilty, the policeman must face the wrath of the law. It is about respecting a woman; respecting another human being.
We do not need shallow-minded people to further mar an already bad situation.
The authorities — from politicians to policemen — must always uphold transparency and accountability. The last thing they should do is shoot the messenger.